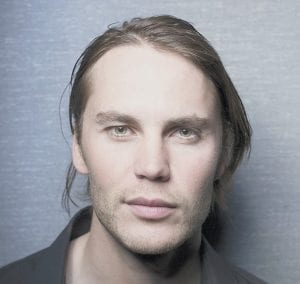 For fans of TV’s “Friday Night Lights,” the sight of a groggy Taylor Kitsch is a familiar one. On the acclaimed small-town Texas drama, Kitsch plays the hard-drinking Tim Riggins, who perpetually rolls out of bed bleary-eyed.

The reason Kitsch was a little sluggish at a recent morning interview at a Manhattan hotel, though, is because he had been working late the day before on the movie “John Carter of Mars” and then flew overnight to New York for the Tribeca Film Festival screening of his latest film, “The Bang Bang Club.”

In it, Kitsch plays South African war photographer Kevin Carter, whose work in early 1990s Sudan earned him a Pulitzer Prize. Carter killed himself in 1994.

Kitsch’s portrayal of Carter — at turns brilliant and self-destructive — is a promising sign of the actor’s budding movie career.

The film, which also stars Ryan Phillippe, is based on photographer Greg Marinovich and Joao Silva’s book “The Bang-Bang Club: Snapshots From a Hidden War.” It chronicles the adventures of a group of hard-living photojournalists while covering the violence of post-Apartheid South Africa.

The fifth and final season of “Friday Night Lights” is still airing on NBC, but Kitsch has already lined up a number of movie projects, including “John Carter of Mars,” Andrew Stanton’s first live action film after making “WALL-E” and “Finding Nemo”; “FNL” executive producer Peter Berg’s “Battleship”; and Oliver Stone’s “Savages.” ‘’The Bang Bang Club” opened in theaters Friday and is also available on video-on-demand from Tribeca Film.

The 30-year-old, British Columbia born actor is considered a swoon-worthy heartthrob. But in person, he mainly comes off as an earnestly excited young actor, eager, as he repeatedly says, to “push it” and “never be outworked.”

“Diving in and disappearing. That’s what I feel it’s about,” says Kitsch, unshaven and slightly shrouded by a worn baseball cap. “It’s no fun if you watch Kitsch on screen. I’m just boring and passive-aggressive.”

“The Bang Bang Club,” which highlights the great bravery of combat photographers, has particular meaning after the deaths in April of photographer Chris Hondros and photographer-filmmaker Tim Hetherington in Libya.

“It’s unreal what these guys sacrifice,” says Kitsch. “If anything, it’s an education to see (the movie), and hopefully you’re along for the emotional ride with these guys. You’re getting an understanding of how these guys risk themselves.”

Marinovich, a Pulitzer Prizewinning photographer, was struck by how much the actors resemble himself and his colleagues when they were younger. But Marinovich (who is played by Phillippe in the movie) cautions that the film — which is quite stylized — is an exaggerated, fictionalized version of the real events and his book.

For Kitsch, the role was enormously challenging. He set about losing a great deal of weight, dropping 35 pounds in two months. Leaving the character behind was also difficult : Kitsch needed counseling to help him transition back after the film.

“It was just the emotional toll and the pressure of playing someone who’s passed on — doing the legacy that they left justice,” said Kitsch, who shadowed photographer Jeff Lipsky to train for the part. “It felt like I could never do enough prep. I could never take enough photos. I could never work with the Leica (camera) enough.”

“Taylor in all likelihood will become a movie star, but he already is a very serious actor,” says Silver. “Taylor very much became Kevin Carter for the period we were shooting ‘The Bang Bang Club’ and he had diffi culty shaking the role. All of that is a testament to how seriously he takes what he does.”

For “FNL,” Kitsch turned to Gary Oldman for inspiration. He says he based much of Riggins, a womanizing football star and a weary, reluctant hero, on Oldman’s gangster in “State of Grace.”

The series, considered by many to be the finest, most humanist TV show in years, catapulted Kitsch to stardom. But it also served as a rewarding incubation in a family atmosphere production. The show was filmed with handheld cameras and in real environs, giving it an almost documentary feel.

Among Kitsch’s memorable adlibs was calling other players by their numbers (QB Jason Street, for example, is called “Six” for much of the show), a habit Kitsch picked up from playing hockey. (A knee injury ended his early hockey aspirations.)

Kitsch launched his acting career when he moved to New York in 2002 to study acting with coach Sheila Grey. He did some modeling and had roles in the 2006 movies “Snakes on a Plane” and “The Covenant.”

He was able to shoot an occasional film on the side during the five years of “FNL” (“X-Men Origins: Wolverine”), but there’s a sense that his movie career is now taking root. Kitsch is quick to caution, though, that he still lives in Austin, Texas, where “ FNL” was filmed, and far away from Hollywood extravagance.

“What was calling was new challenges, new endeavors, regardless what it was — something to keep growing through,” says Kitsch. “You get these little bits. You go in and work with (Hugh Jackman) for two weeks and then you come back (to ‘FNL’). It was like this little tease that kept happening, and I was just excited to keep challenging myself and keep going.”