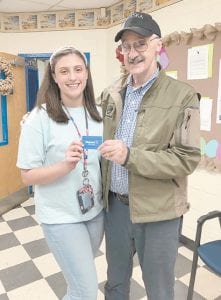 Keisha Niece, a student at Letcher Middle School, was a winner of the Conservation Writing Contest sponsored by Kentucky Farm Bureau and the Kentucky Association of Conservation Districts. Presenting the prize to her is Letcher County Federation President Harold Stanfill.

We’ve actually had a few days that felt like spring in this little section of the Ohio Valley area. While driving in the afternoon with the sun hitting the windshield, I was tempted to turn the air conditioning on.

I hope there’s enough propane gas in the tank so I won’t have to go to the expense of getting it filled.

As I have said before, it has to get warm someday. I have a couple of friends who keep their thermostat around 65 degrees. Oh no, I can’t stand that much of a cooler temperature in the house. Fact is that I will be glad when I can feel the 90 degrees again.

Vicki Power and I went on an adventure that was very enjoyable. It has been several years since I had been on some of the roads. Dale Farmer, who is a good musician, is from the Camden, Ohio area. Dale produced a movie titled Mountain Minor. It has been shown in several states and received wonderful reviews.

Mountain Minor was shown at the Art Center in Hamilton, Ohio. Of course I wasn’t feeling well and missed it. When I received the invitation to attend a special House Concert, Vicki and I planned to go. The spots were filled so fast Dale had to hold the event on Monday and Tuesday. 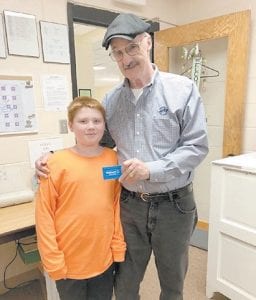 Kentucky Farm Bureau and the Kentucky Association of Conservation Districts sponsored the annual Conservation Art Contest, in which West Whitesburg Elementary School student Aaron Sexton was a winner. He is pictured with Harold Stanfill, President of the Letcher County Federation.

Dale prepared a delicious potluck supper, and two entertainers, Frank and Allie from North Carolina, did such a wonderful job with old-time music, then it was time for the movie. I had seen bits and pieces as the movie progressed. Nothing could prepare for the movie. It is based on actual life in the mountains. Of course anyone who knows anything about me knows that I will never get the mountains out of my heart and very soul. I hope some way that Appalshop in Whitesburg will pick up this film and show it.

Vicki and I attended on Tuesday night; a surprise was waiting for me, as Ma Crow was there also. Ma Crow, Vicki Abbot, Margie Drees, and Warren and Judy Waldron attended Monday night. How I regret changing our time until Tuesday as it would have been great to be with everyone at the same time.

Dale lives in a cabin that he helped build .The setting is beautiful, oh how I wish I had taken the time to have Dale’s mother, Cathy, show Vicki and me through the entire cabin. The rooms are spacious. Frank and Allie had a rack of tee shirts covering the opening of the fireplace. I teased Vicki about us going over and pushing the rack out of the way so we could see the fireplace, even though there wasn’t a fire going. On the mantle sat two kerosene lamps. It was such a special place to hold this event.

Dale did such a wonderful job in producing this video when he picked Ma Crow to appear, as well as all the other. I can remember when Coal Miner’s Daughter came out, how so many scenes were so touching to me. Then came movies called Where the Lilies Bloom, Spencer’s Mountain, Burning Bed, Bridges of Madison County, these movies have been my favorites, and now that I’ve seen Mountain Minor. it makes the top of the list with me.

On the way home Vicki and I started laughing, saying we hadn’t been out until midnight in so long, that we may turn into a pumpkin.

Hello to Laura who works at Appalshop. Life is ironic at times. In a brief conversation with Laura, I found out she is from Cincinnati and lives in Whitesburg, here I am from Roxana and live not far from Cincinnati.

Saturday afternoon, I had the pleasure of spending time with my daughter Anna Nottingham, her husband Scott and Kyle. Beechwood High Winter Guard held its last competition at N.K.U. My granddaughter Katie Nottingham is part of this group. Beechwood Winter Guard came in second place. It is such a pleasure to watch all the groups, to see the themes, the costumes, the graceful movements. All the time spent in practicing you don’t think about until you watch. Afterwards Scott, Anna, Kyle and I went to Cracker Barrel.

Sarah and Jessica are in Peru for this week. I will be one glad grandmother when they get back home. The group left CVG on a small plane. As it was getting ready to leave the airport, as it was taking off, the pilot quickly aborted the flight. He made some excuse as to why, so he wouldn’t upset the passengers. He knew something was wrong with the plane. It took a while to get everything back in order, which meant the schedule was a couple of hours late for the rest of the trip. Thank God this pilot was smart enough not to try to keep flying.

Sarah sent her parents a message that it is really hot where they are. Scott said, “Well after all, it is South America.” I will be satisfied to travel to my beloved eastern Kentucky.

Carcassonne Square Dance is April 13. Will Bowling is the caller. Music provided by Sunrise Ridge. Doors open at 5:30 p.m. Spaghetti dinner will be served.

Carcassonne is planning a big day April 13! A bass fishing tournament will be held at Carr Creek Lake from 7 a.m. to 3:30 p.m. Contact Jackie Logan for details or see below. Once again, thanks to Mike and Marcia Caudill for making this possible, and to all the help of others.

Those of you who like Jewelry and have a computer, check out Libby Smith’s PAPARAZI l Jewelry. I really enjoy watching Libby as it seems to connect me with the place I call home.

Johnny and Ann Calihan and the family are doing alright. Ann’s finger is still giving her some problems. Their daughter Sue Wagner is spending time at her home in South Carolina trying to get her home ready for sale, so she can make the transaction back to this area. Sue is still on the liver donor list.

Just a reminder with spring arriving, this means grass is growing and will need mowing. Please give Jack’s Lawn Care Service a call. Cell – 606 335-7179 or home- 606-633 9925. Free estimates, no job is too big nor too small. Mowing, brush removal, weed eating, hillsides, cemetery.