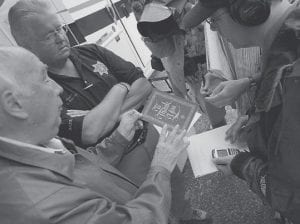 Robert Murray, left, founder and chairman of Murray Energy Corp., showed a thank-you card from one of family members of six trapped coal miners during a news conference Monday at the entrance to the Crandall Canyon Mine in Utah. (AP)

As we go to press, six coal miners remain trapped in Murray Energy’s Crandall Canyon Mine, near Huntington, Utah. Nothing has been heard from them since a portion of the mine caved in on August 6, and the heartbreakingly slow efforts to reach them have yielded no sign of whether they are alive. We join with mining communities throughout the coalfields in praying for their rescue, even as time grinds away at the odds of achieving that outcome.

Meanwhile, everyone anxious about the fate of the miners has had to endure a week of watching the mine’s owner, Robert Murray, demonstrating why he doesn’t deserve to be trusted with the facts, let alone the lives of thousands of people who depend on him for their livelihoods.

Day after day, in the guise of holding “news” briefings, Mr. Murray has hosted his own bizarre talk show for the assembled media – insisting that an earthquake caused the cave-in, refusing to acknowledge or accept any responsibility for hazardous conditions at the mine, denying that he was engaged in retreat mining (pulling the pillars of coal that would otherwise be left in place to support the roof), and abusing his access to the media by delivering unsolicited lectures on national energy policy and attacking anyone who might have differing views about what went wrong at Crandall Canyon.

Particularly galling to us were his off-the-wall rants about former federal mine safety officials Davitt McAteer and Tony Oppegard, both of whom we know well. McAteer, who headed the Mine Safety and Health Administration (MSHA) in the Clinton administration, has spent his whole adult life working to improve occupational health and safety. Oppegard, a former MSHA attorney who was Kentucky’s chief mine safety prosecutor before being pushed out by Gov. Ernie Fletcher, now puts in countless hours representing miners and their families as a private mine-safety practitioner. Both have been among the most effective advocates miners have ever had – a distinction Bob Murray would no doubt claim for himself, but one that wouldn’t seem likely to withstand scrutiny.

For awhile, though, he got away with it. Among the hordes of reporters who descended upon his mine were many who seemed to regard Bob Murray as a bumptious but benevolent – even heroic – presence. In the absence of any hard news about the hoped-for rescue, they floated soft pieces about the mine owner’s personal rags-to-riches saga (a Washington Post headline called him “coal’s best friend”) rather than doing some digging to see whether Mr. Murray’s self-serving briefings might be obscuring the real story.

Gradually, however, his Berlin Wall of bluster began crumbling. The first blows came from seismologists who reported that the “seismic event” at Crandall Canyon was the violent cave-in itself, not an earthquake triggering it. Then MSHA contradicted him, confirming that Crandall Canyon was indeed doing retreat mining in the area of the cave-in. Then, toward the end of the week, came reports that miners who had been working in the area had been fearful about their safety. Mr. Murray promptly gave those “rumors” the back of his hand.

But they were more than rumors. Most damaging to Mr. Murray was the news, reported in the Salt Lake Tribune on August 12, that the mine experienced “serious structural problems” in March – so serious, in fact, that mining had to be abandoned in an area not far from where the cave-in subsequently occurred, and mine managers called in a consultant to advise on whether that area could be safely retreat-mined.

The basic problem was that Crandall Canyon was mining a coal seam at a depth of about 2,000 feet, many times the depth of mines in Appalachia. That much overburden creates enormous stress, increasing the risk not just of roof falls but also of “bumps” or “bounces” in which the mine ribs or floor can suddenly give way with explosive force, firing chunks of coal like bullets and reducing solid coal pillars to rubble. Inasmuch as bumps in Kentucky mines have killed miners and left the lucky survivors with coal shrapnel permanently embedded in their skin, it’s easy to understand how much greater the risk was at Crandall Canyon.

But retreat mining proceeded anyway – until the cave-in. MSHA’s role in approving the mining plan is one of the things that will have to be scrutinized when the causes of this disaster are being investigated. Because the risks of bumps (especially in the West) are well known, MSHA has a computer program that allows regulators to plug in variables such as the height of the overburden, the nature of the overlying strata, and the size and strength of the anticipated pillars of coal, to show where critical stresses can occur and help determine if retreat mining should be permitted. Whether this was done, either before or after Crandall Canyon’s problems arose in March, and whether MSHA then signed off on Murray’s retreat-mining plan despite the high risks involved, is not yet known.

After any disaster, MSHA investigates not only the causes but also the adequacy of its own actions. In our view, it’s not enough for an agency with life-and-death responsibilities to investigate itself – nor is oversight by Congress a sufficient backstop, because no member of Congress has the necessary expertise. Accordingly, we believe (and we hope key lawmakers such as Sen. Robert Byrd and Rep. George Miller will agree) that MSHA should depart from past practice by retaining a group of outside experts – including former and retired MSHA professionals – to augment its internal investigation of the Crandall Canyon disaster.