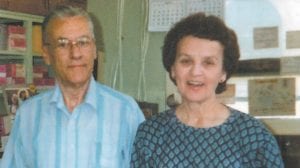 Jessie Anderson, 92, died March 1 at her home in Whitesburg.

A daughter of the late Irvin and Hannah Ison Frazier, she was the widow of Eugene Anderson.

Mrs. Anderson was the former co-owner of Eagle Printing Company of Whitesburg, a job printing firm she and her husband purchased from Tom and Pat Gish in the early 1960s. The Andersons, who began working in the printing business for The Mountain Eagle in the late 1940s, operated Eagle Printing until Mr. Anderson’s death in 2002.

She was a sister of the late Hazel Bowen, Charlcie Smith, Georgia Collins, Barbara Stambaugh, and Estevah Reach, and a grandmother of the late Johnathon Crider.

Funeral services for Mrs. Anderson were held March 4, at Letcher Funeral Home in Whitesburg. Burial was in the Frazier Cemetery at Premium.