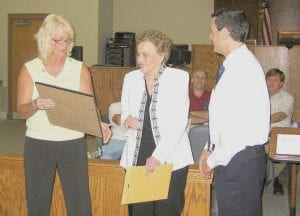 Retired MCHC director Lois A. Baker (center) and State Sen. Daniel Mongiardo looked on Monday night as State Rep. Leslie Combs read from a citation honoring Baker for her accomplishments while in charge of the company.

Combs, who represents the 94th District, presented Baker with a certificate of appreciation from the Kentucky House of Representatives. The fiscal court presented her with a plaque recognizing her many contributions to the betterment of life in her home county and her work in helping to establish the nationally recognized community health care center in Letcher County.

The presentations were made during a special session of the fiscal court held just before its regular July meeting. Judge/Executive Jim Ward said the session was called to honor MCHC and “a lady who has done a lot for our county” by providing jobs, leadership, and service to the community. He said the court felt it was important to recognize Baker for the many positive effects MCHC has on the county.

District Five Magistrate Wayne Fleming joined Ward in showing his appreciation and said he has had a long relationship with Baker, as a patient at MCHC’s clinics as well as in politics – and not always on the same side.

“Mrs. Baker and I haven’t always been on the same page politically,” said Fleming. “But I have great respect for her. She has done so much for Letcher County and for my family. I don’t think people could have the kind of health care we have here if not for her. I’ve also fared better when I was on her side politically.”

Baker gave a timeline on the development of MCHC from its beginnings at an LKLP meeting in 1971 through its recognition as the number one community health care facility in the United States with clinics in five counties, shortly before she retired last year. She told the court she didn’t know the reason for the success of MCHC except that she had surrounded herself with a competent and loyal staff composed of local people.

“I don’t have a good explanation for why MCHC did well,” said Baker. “Why did we succeed when others failed? We stuck with local people, together, all of us, mountain people. Others talk about how foolish we are here in eastern Kentucky, but we built a health program that was number one in the nation when I left.”

Baker told the court the first baby was delivered at MCHC in 1976 and approximately 10,000 have been delivered since then, most successfully. She said MCHC has one of the most successful obstetrics/gynecology programs in the nation and has worked closely with Whitesburg Appalachian Regional Hospital to provide high quality care to mothers and children, with prenatal examinations done at the Whitesburg MCHC Clinic and birthing and post-natal care at WARH. Baker’s son, Dr. Wade Baker, has charge of MCHC’s OB/GYN program.

Baker said although she is retired now, she still goes to the Whitesburg offices of MCHC once or twice a week just check on the “kids.” She said she is proud of Letcher County and proud of the employees that make up MCHC.

Magistrate Fleming told Baker he believes she is at the root of MCHC’s success and Judge Ward agreed, saying the clinic’s success was because of Baker’s leadership and a group of loyal employees. Baker’s son, Mike Caudill, an attorney and current CEO of MCHC, told the court MCHC’s employees are responsible for its success.