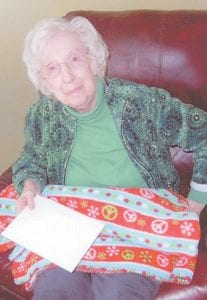 100TH BIRTHDAY — Elsie Caudill Banks, formerly of Cowan and now a resident of Letcher Manor, will observe her 100th birthday on March 27. She wrote the Cowan news for The Mountain Eagle from 1973 until 2004, and always enjoyed passing along news from home and far away. Of her seven siblings, she is the fourth to have reached 100 years of age. This year she has enjoyed telling of being the same age as the Daniel Boone Hotel in Whitesburg, joking that she is in a much better condition than the Main Street structure. (Photo by Judith Vermillion)