Mrs. Bentley reminds us why we shouldn’t forget the elderly 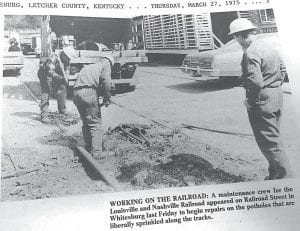 This image is taken from the March 27, 1975 edition of The Mountain Eagle and shows an L&N Railroad repair crew working to fix potholes in downtown Whitesburg less than 24 hours after Helen Bentley blocked the railroad tracks with her small car and refused to move it unless the railroad agreed to fix the badly damaged street.

Editor’s Note: Many present and former Letcher County residents will remember Helen Bentley for her work as a reading teacher in the Letcher County School System in the Sixties and Seventies. She is now 102 years old, Mrs. Bentley, also known for her belief in civic duty, once singlehandedly forced the L&N Railroad to send a repair crew to downtown Whitesburg to fix huge potholes in what was once known as Railroad Street after she blocked the railroad tracks with her small car and refused to move until the railroad agreed to do what was right. The following tribute mentions that incident and much more about the life of one of the county’s oldest living residents.

Helen Bentley, age 102, was born in the Woodrock coal camp on the North Fork of the Kentucky River in Letcher County, Kentucky on February 15, 1914. She married Manford Zenneth Taft Bentley of Whitesburg, gave birth to two sons, and taught school for about 30 years. 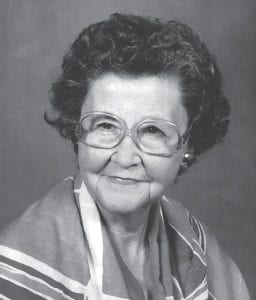 One of Letcher County’s oldest living residents, retired school teacher Helen Bentley, is living happily and well in Jenkins. Mrs. Bentley was the first to serve as president of the Letcher County Teacher’s Organization.

By reputation, she was a good citizen, being very active in her favorite community club — the Whitesburg Garden Club. She was active in community affairs, being the first president of the Letcher County Teacher’s Organization in the teacher’s strike for recognition by the Letcher County Board of Education in matters of pay and working conditions.

Her courage was her sterling quality. On an occasion of community need to repair Railroad Street in Whitesburg, she noted that the L & N coal trains had worn out the wooden ties along the street. The flexing of the steel rails had created large potholes that damaged automobiles as they crossed and re-crossed the track running through the county seat.

No one seemed to know what to do. The city did nothing; the railroad did nothing; the repairs to the cars frustrated motorists. The solution was simple; the course of action was plainly indicated to Helen. She stopped a long coal train with her Volkswagen automobile and demanded that the engineer of the train call Louisville to advise the railroad that someone must fix things or no trains would be moving down the river. 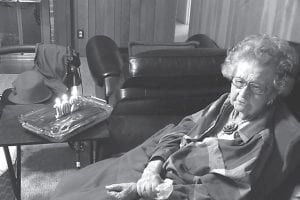 Other people joined her, but not everyone appreciated her stand. Threats were made to smash her car, and push it off the track. Helen would not move. Her son came out from his father’s store with a rifle to protect his mother. Someone called the executives of the railroad. Assurances were given that the track and the street would be repaired promptly. Helen moved her automobile. Violence was avoided. The street was repaired. The L & N trains pulled out the coal. Helen’s courage helped her community.

From the ending of the eastern Kentucky mountain feuds to the world in neverending global war, hot and cold — from the roaring twenties to the great flood of 1927 and the Wall Street crash of 1929, from the Cuban Missile Crisis to the U.S. landing on the moon, from the fall of the Berlin Wall to the rise of Muslim terrorism and 9/11, from the undeclared wars in Vietnam and Korea to the endless world war of fear and preparation for more wars — her life has spanned more than 100 years.

Helen’s life is a story that should be told. Every life is a story. Stories, as well as lives, should have a happy ending. There is something else that must be said.

Great Grandmother Bentley lived independently, until about age 90. After that she resided with family, and then in assisted living. After a short stay in the hospital, she decided to live in a rest home where her family and friends could visit with her. The decision was not a good one. Her mind was slower, her body was slower, but her memory and her courage were still Helen.

As the visits continued, she was often fearful, distrustful, and angry. The family took her out of the nursing home. Finally, Helen was moved to Jenkins to the home of her favorite sitter, a woman who she adopted by choice as a daughter. Her family and a few old friends visit with her. She is happy there. She is unafraid, and she smiles when she remembers the happy times.