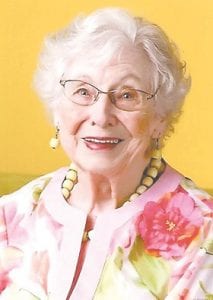 Funeral services were held recently for Mabel Burklow, who died in her sleep at home in Hazard on July 11, just four days after she had been surrounded by her children and other family members in celebration of her 101st birthday.

Mrs. Burklow was born on July 6, 1911 in Whitesburg to parents Adeline Polly and Samuel C. Blair. She later lived in Fleming, where she and her husband Ernest Burklow raised three children. Their family moved to Hazard in 1953 when Ernest accepted a job transfer.

Mrs. Burklow was a graduate of Whitesburg High School and was the last surviving member of the senior class of 1929. She attended Eastern Kentucky University and Berea College. Some years after her 1935 marriage and later arrival of children, Mabel completed her undergraduate and Master’s degrees at the University of Kentucky. She and her daughter, Marcia, obtained their Bachelor’s degree from the University of Kentucky at the same graduation ceremony in 1958. Mabel also returned later for post-Master’s work at UK.

She had a 32-year teaching career that included work at Fleming-Neon High School, Dilce Combs Memorial

High School, Lothair Elementary School; and in the final years of her career, she served as the librarian at the Roy G. Eversole Elementary School in Hazard. As a life-long resident of eastern Kentucky, she loved the mountains, her family and friends, and held fond memories of her former students. She took great pleasure when any of her students indicated to her that she had been a positive influence upon their life or career.

In addition to her parents, Mrs. Burklow was preceded in death by sisters Edith Davies and Eunice Shout. She is survived by one daughter, Marcia Burklow, of Frankfort, and two sons, Sam and wife Susan of Fresno, Calif., and Ernest Gerald and wife Mary of Suwanee, Georgia. She is also survived by six grandchildren, 10 great grandchildren, and two nephews.

Funeral arrangements were handled by the Maggard Brothers Funeral Home in Hazard. Burial was at the Sandlick Cemetery in Whitesburg. The Reverend Tony Brown officiated.