Mrs. Calihan to be buried here 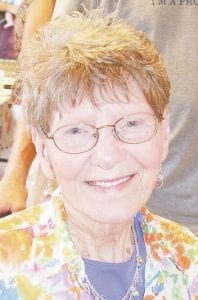 Funeral services were held July 25 in Hamilton, Ohio for Jewel D. Calihan, 79, who died at her home July 22 while surrounded by her family.

Mrs. Calihan was born in Hiram on April 18, 1933, the daughter of David F. and Delilah J. (Lewis) Cornett. On August 6, 1949, she married Claymon Calihan, who preceded her in death in 1967. Shortly thereafter, she moved from Roxana to Hamilton with her eight children. She was a member of Zion Lutheran Church.

She is survived by sisters Shirley Hollingsworth, of Noblesville, Ind., and Lee Reese of Cleves, Ind.; sisters-in-law, Delores Cornett and Margaret Cornett, and by her aunt and dearest friend, Ardella Redmon.

In addition to her husband, she was preceded in death by her parents and brothers David and Herbert Cornett.

Mrs. Calihan was especially thankful that her daughter, Sophia, provided special care and a home after her heart attack in 1994 and that her son, Ken, provided a lovely home for her that she enjoyed for the last 10 years.

The funeral service was held at the Weigel Funeral Home. Mrs. Calihan will be buried July 26 next to her husband in the Stamper Cemetery at Roxana.