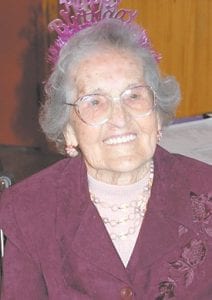 Retired teacher Ruby Caudill had a smile for wellwishers who attended her 100th birthday celebration in Whitesburg on Sunday.

At the beginning of her teaching career in 1943, Ruby Mullins Caudill walked six miles to teach students in a one-room schoolhouse in Lincoln County in southcentral Kentucky. At the end of the school day she would walk the six miles back to her home from the school in Buck Creek.

Mrs. Caudill, who now lives at Thornton, turned 100 on Monday. On Sunday, her friends and family hosted a birthday party for her at the Mountain Shrine Club building in Whitesburg.

In 1951, Mrs. Caudill began teaching at the old Upper Cumberland School near Flat Gap in Letcher County. She remained there until she retired in 1979, shortly before the school closed.

Debbie Miranda, one of Mrs. Caudill’s two daughters, said Mrs. Caudill turned the cloakroom at Upper Cumberland into a lunchroom and started her own hot lunch program at the two-room school. She also made sure her students were clean and had clothes to wear.

Holbrook said she remembers being three or four years old and going to school with her grandmother. During one of those visits, Mrs. Caudill took Holbrook’s peanut butter and graham crackers from her and gave the food to a child who was hungry and didn’t have anything to eat. Holbrook said she was angry at the time, but now knows why her grandmother made her give up her snack.

“Now that I am a teacher I understand why she did what she did,” said Holbrook, who teaches at Arlie Boggs Elementary School. “She provided for so many people.”

Miranda has similar stories to share. She can remember coming home from classes at Eastern Kentucky University in Richmond to retrieve her winter clothes, only to find them all gone.

“She gave away my favorite coat,” said Miranda, whose mother began teaching when Miranda was nine months old.

Miranda said her mother was sweeping the schoolhouse floor one day in May 1954 and ruptured a disc in her back while pushing a desk out of her way.

“She went to Knoxville, had surgery and was back teaching in August,” said Miranda.

“She is the strongest woman I have ever met in my life,” agreed Holbrook. “She could do anything. She got up way before we ever thought about getting up.”

Mrs. Caudill attended Morehead State University before teaching in Lincoln County with emergency certification in 1951. While teaching, she attended night school and summer classes through Eastern Kentucky University, from where she was graduated in 1965.

Mrs. Caudill has been an avid quilter for most of her life, making more than 150 quilts over the years.

Julie Shelton, Mrs. Caudill’s granddaughter who lives in Prestonsburg, remembers her grandmother being able to peel an entire potato with the peel staying in piece.

“When she was cooking in the kitchen, she would sing ‘Swing Low, Sweet Chariot,’” said Shelton. “If she wasn’t singing, she was whistling.”

Mrs. Caudill also appeared in the 1980 Loretta Lynn biopic “Coal Miner’s Daughter,” which starred Sissy Spacek and Tommy Lee Jones. Much of the movie was filmed in Letcher County, including a pie supper scene at the Upper Cumberland School in which Mrs. Caudill can be seen clapping her hands and encouraging ladies to dance.

“She loved it,” said Holbrook, adding that Mrs. Caudill attended the premiere of the film in Louisville in 1980.

Mrs. Caudill has survived cancer and tuberculosis. Even though she has had pneumonia twice this year, Holbrook said her grandmother remains resilient.

“The best thing she has given her children and grandchildren is showing them how to survive and overcome everything in life,” said Holbrook.

For her 95th birthday, Mrs. Caudill decided to have her ears pierced.

“She always wore clip on earrings and for her birthday she wanted her ears pierced,” said Holbrook.