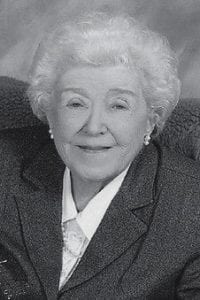 Atha Dora Bentley Caudill died July 8 at her home in Whitesburg. She was 97 years old.

Born at Letitia, she was a daughter of the late Otho and Sadie Collier Bentley. She was the widow of Judge James M. Caudill.

Funeral services were held July 10 at the First Baptist Church of Whitesburg. Burial was in the Caudill Plot at the Sandlick Cemetery.

Mrs. Caudill was a retired U.S. postal worker, the senior member of the First Baptist Church of Whitesburg, and a member of the Whitesburg Woman’s Club. She was a former president of the Fleming-Neon Band Boosters, and a former member of the Kentucky Democratic Executive Committee.