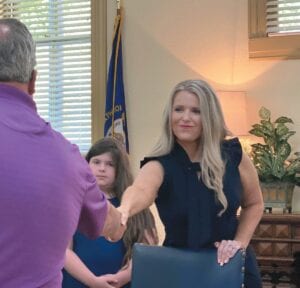 The council took the vote Tuesday after a short, closed session.

Crying as she accepted the appointment, Tiffany Craft moved from the front row of the gallery where she had sat with her parents to the seat council table seat her husband occupied for the past 15 years.

She said her husband loved the city and passed that love on to her.

“I will go to the mat for this city,” she promised, wiping tears. “Yes, I want to finish out my husband’s term, but I want to lead this city more than anything.”

“This is a milestone for us. Whitesburg’s first woman mayor,” Councilman Mike Jackson said.

After a short delay while they searched for a Bible, Craft was sworn in without one, since it is not required. Her daughter, Sammi Craft, stood at her side for the ceremony. The new mayor promised the crowd that she would be more organized as mayor.

The oath of office was administered by Letcher Circuit Judge James W. Craft II, who served as city attorney before his father was elected mayor. Judge Craft said he didn’t come to do a swearing-in ceremony. He did not have the certificate that he normally gives new officials, and performed the duty in a polo shirt and jeans, not his judicial robe.

“I actually came to thank the council and the employees and the people for making Dad’s funeral so special,” he said, his voice breaking.

He said while did not expect a vote that night, he asked that the council consider naming the Whitesburg River Park in honor of his father.

The vote to appoint Tiffany Craft mayor was done quickly, after the council named Jackson to lead the meeting until a mayor could be chosen, and held a closed session to the discuss the issue.

The closed session took less than five minutes, after which the council returned to ask if there was anyone in the audience who would like to be considered for the position.

Patty Wood, the widow of former Letcher District Judge James Wood, stood in the audience and told the council she had worked with the city’s water bills, tax bills, and with the Federal Emergency Management Agency after flooding, and felt that she was qualified for the job. She had previously submitted a letter asking to be appointed.

Jackson called for nominations, and Craft was the only person nominated. Councilman Larry Everidge made the motion to appoint Craft, and Councilman Derek Barto seconded the motion. The council voted unanimously to approve her appointment.

Jackson then turned the meeting over to the new mayor to proceed.

In other business at Tuesday night’s meeting, the council:

• voted unanimously to approve working with God’s Pantry and the Letcher County Food Pantry on a food giveaway scheduled for Wednesday, July 21, at River Park. Whitesburg City Clerk Donna Perkins told the council that the event will provide 144 boxes of fresh food and produce to Letcher County residents who present proof of residency and meet income guidelines set by the event’s organizers. Perkins said she did not have a copy of those guidelines as of Tuesday’s meeting.

The giveaway will begin at 11 a.m. Those hoping to receive food are asked to enter River Park from the Jenkins Road side (Tunnel Hill) and city employees will load food boxes into vehicles. Perkins said one box of food each will be provided to each qualifying family.

Perkins also said the organizers hope to have two more events, one in August and one in September.

• listened to concerns expressed by council member Shelia Short about the amount of litter in River Park. Short said many people visit the park to fish off the banks of the North Fork of the Kentucky River, and that some of them are leaving trash behind. Council member Jackson suggested the possibility of hiring or designating a grounds crew to maintain the park. New Mayor Craft said seasonal workers may be hired to help keep the park clean.

• heard from council member Derek Barto, who said he hopes the city can hire additional police officers. Barto said there is only one officer now on duty during nighttime hours. Mayor Craft said expanding the city’s police force is on her agenda.