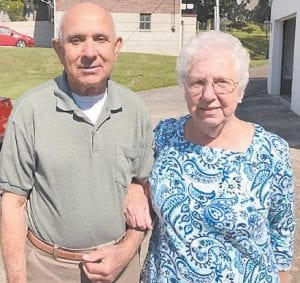 So much of my weekly news comes from social media. If it weren’t for Facebook there is no way I would be able to know what all is going on in our community. I find myself surfing through Facebook continuously looking for things to put in the column. This was something I found posted and they gave me permission to put it in the paper.

Dad wrote this story about an event that happened when he was young. It will be in the March 2019 issue of The Kentucky Explorer. He wanted me to share it here also. Hope you enjoy it.

“I was born in Gordon, Kentucky. Now just where on earth is this place? It is in Letcher County, which is in the southeastern part of the state. Gordon is on the west side of the county. My story took place along Line Fork Creek. I was born two miles down the creek from Gordon. This was my home for the first year and a half of my life. My second home was nearby about a half mile up Pitcher Branch. This was a two-room log house, and it is also where my story began. You may have heard of families being dirt poor. Well, my family was poorer than dirt poor. We were rock poor, which is worse than dirt poor. My mom had 13 children. Twelve of us survived to adulthood. Unfortunately, one son died when he was 18 months old. My dad died in 1940 when I was four and a half years old. Our milk cow and new calf also died, so that meant no more milk. Cholera killed all the hogs on the farm, so that meant no more meat. You can guess how long the chickens lasted. Not long at all. More or less we were down to cornbread and ‘taters. Four of my older brothers were in WW II at the same time. This left eight children for Mom to worry about feeding three meals a day. Some days we only had one or two meals a day. This gives you a good idea of my family life. 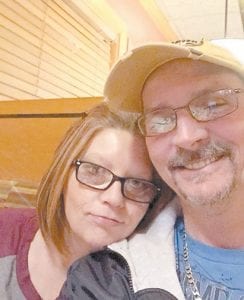 “My mother was a very religious woman and a member of the Old Regular Baptist Church of Jesus Christ near our home. Sadly, a nearby church burned down, so her church held a special meeting to try to raise enough money to help them rebuild. One Saturday in 1943, Mom left us at home and walked two miles down the creek to the meeting. During this meeting people used split logs setting on big rocks as their bench seats. When it came time for the people at this meeting to donate money, my mother put her hand in her big, black purse, but could only find one quarter. That was all the money she had in this world. She began rubbing the quarter between her thumb and fingers while thinking what would one little old quarter buy her. She figured not much of anything. However, with her big heart she figured that it just might help in a small way to build this new church house. So she took that last quarter and gave it to the preacher and headed home. 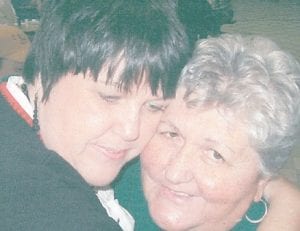 Brenda Thomas Richardson is pictured with her mom, Ann Thomas.

“Now, before she left the house that morning, she told two of my brothers to go to the post office and get the mail. This was a two and a half mile walk up the creek. Mom wanted to see if any of her four older sons in the war had sent her a letter letting her know that they were still alive. When Mom got home from the meeting, my two brothers met her and told her that she had a letter at the post office, but it was registered mail and she would have to sign for it. Soon she headed up the creek to get the letter. When she got the big brown envelope, there were several people around, so she didn’t want to open it there. After she walked about one-eighth of a mile back home, she stopped and opened the envelope. From the handwriting she knew which son had written the letter inside. When she opened the envelope she saw 14 brand new $100 bills. This was the most money my mom had ever seen at one time in her life and it was now hers. On Monday, she walked 14 miles across Pine Mountain to put her money in the bank in Cumberland, Kentucky. 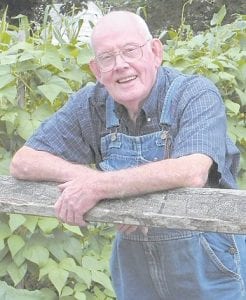 “When Mom gave her last quarter to the church she had enough faith in God that somehow God would see to her needs. In 1944, Mom bought us a house on Line Fork Creek just about one mile from the old log house. We now had two acres of level land. I thought I was in heaven. Mom told me that if she didn’t get the kids out of Pitcher Branch that they were going to go wild. Next, she bought an old spotted sow hog. We soon had 18 pigs and meat on our table. As more pigs were born, that meant more money for us, because mom would sell them for $35 each as soon as they could crack a grain of corn. Man oh man, we were living on easy street and were so grateful. So, now I give a donation at the Old Regular Baptist Church of Jesus Christ near my home in Indiana where I am a member. In addition to the paper money donation, I always give one quarter in honor of my mom and her faith in God.”

I absolutely love stories like this. I just can’t imagine what these mothers went through once their husbands passed away. I listen to Lizzie Mae Wright tell about what all her mother did after her husband passed away and she had children to raise.

That was back when they had no running water or inside toilets, or any of our modern day conveniences. I would love to just sit down and talk to Randall Kincer about how he was raised and their everyday adventures. As long as he doesn’t call Bonnie a “heifer” I could talk to him all day about it.

I found so many birthdays on Facebook this past week and I will just name a few here. One of my old Cane “Holler” friends, Jerry Lucas, celebrated his birthday on Jan. 31. Betty Jo Webb Pike is a former member of the Letcher County Senior Citizens and she celebrated her birthday on Feb. 1. And last but certainly not least is my first cousin, Kim Pennington Lucas. She celebrated her birthday on Feb. 2. She spent many nights with us when we were growing up. Daddy loved teasing her. She would always beg us to tell her “scurry” stories.

Brenda Thomas Richardson had many posts on Facebook requesting prayers. Her husband, Jerry Richardson, had open heart surgery at Pikeville Medical Center on Feb. 1, and then her mom was admitted to ICU there also. Then, later she asked prayers for her father. He was also admitted to the hospital there. Also, please remember all the families who have lost loved ones. My pastor Bill Jones and his wife Sandy continuously need our prayers. If you have no other reason to pray then please pray for them and their family.

As I continue to end this column with Oma’s plea, I can see her face every time as I type it. Remember to be in church Sunday and I add if your church has services throughout the week or on Sunday evening, God wants you there then, too.