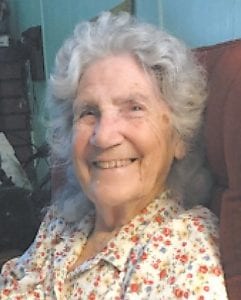 During the 15 years of writing her column, “Whitesburg news,” Mrs. Hatton became known to many for her friendly smile and exuberance, and was one of the most popular correspondents in The Eagle’s 110- year history.

“It was her life,” son Billy Hatton, 67, said of his mother’s volunteer work for the newspaper. “She’s a legend. She’s an icon.”

A daughter of the late Bill and Cinda Fields Howard, Mrs. Hatton was born November 21, 1930 in Blackey, but lived most of her life in Marlowe near West Whitesburg.

At the time of her death, she was one of only two Marlowe residents still living who were there when the former coal camp contained as many as 50 houses.

Mrs. Hatton was married to the late Clyde Hatton, who died in September 2009. The couple had three other sons in addition to Billy — Robert, 69, of Owensboro; Astor, 68, of Georgetown, and Larry, 65, of Marlowe. At the time Mrs. Hatton fell ill Friday, the four brothers were about to leave her home for what would have been their 23rd annual trip to the fall NASCAR race at Bristol Motor Speedway in Tennessee, an event Mrs. Hatton often wrote about.

A loving mother, sister, and a great friend to all who knew her, Mrs. Hatton was extremely proud of her 10 grandchildren, all of who have successful careers. Two grandsons, Jonathan Hatton and Kevin Hatton, are physicians and two are attorney/politicians — Letcher County Attorney Jamie Hatton and 94th District State Representative Angie Hatton. Grandson Joe Hatton is a professional chef in Lexington, granddaughter Jennifer Hatton is a nurse in Ashland, grandson Chris Hatton owns and operates a heating and cooling firm in Whitesburg, granddaughter Kathy Hatton teaches school in Alabama, and granddaughters Rocki Hatton and Wendy Hatton are licensed clinical counselors.

After staying at home to rear her four sons until they left home for college, Mrs. Hatton held jobs at the old Craft’s Department Store on Main Street in Whitesburg and the West End Market above the old Whitesburg football field while her husband was completing a 41- year career in underground mining for Elkhorn-Jellico (Marlowe) and Westmoreland. Mrs. Hatton also traveled home-to-home selling Studio Girl cosmetics.

The thing Mrs. Hatton enjoyed most, however, was visiting yard sales with her mother, said Billy Hatton and his wife, Sandra.

“She said her fondest memories were going to pick up Cinda and taking her yard-selling,” Sandra Hatton said, adding that neither Cinda nor her coalmining and Pentecostalpreaching husband Bill, who worked 40 years underground, ever drove a car.

Noting that Oma had a good sense of humor and often laughed at herself, Sandra said that Oma loved to tell the story about the time when she and Cinda were out yard-selling and came upon several beautiful quilts hanging outside. After waiting several minutes for the quilt owner to come outside, Cinda grew impatient and had Oma knock in the door of the home. When the lady of the house came to the door and Oma asked about the price of the quilts the lady answered, “That’s my laundry. They’re not for sale.”

“We love her dearly,” Sandra said as she recalled the tale. “She just enjoyed life.”

Surviving in additio to her sons and grandchildren she is survived by daughters in-law, Linda (Larry) of Marlowe, Rosemary (Astor) of Georgetown, and Sandra (Billy) of Campbranch.

Mrs. Hatton also leaves behind her dog Susie, which she loved to dote upon.

Funeral services were held August 22 at the First Baptist Church of Whitesburg. Burial was in the Douglas Day Cemetery in Whitesburg.