Mrs. Henry wants to bring civility back to politics 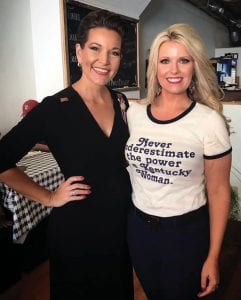 Tiffany Craft, right, wife of Whitesburg Mayor James W. Craft, was among the local residents greeting former Miss America Heather French Henry, who is a Democratic Party candidate for the office of Secretary of State.

The Kentucky Secretary of State’s office should be run as nonpartisan, and be easier for people starting businesses to navigate, the Democratic nominee for the office said in Whitesburg last week.

Heather French Henry and her husband, former Lt. Gov. Steve Henry, made a daylong campaign stop in Whitesburg during the Whitesburg Day festivities September 25, and stopped by The Mountain Eagle office.

Th e Kentucky Secretary of State handles all corporate and other business filings, is the custodian of Revolutionary War Land Grants, and was chair of the Kentucky Board of Elections until the Republican-controlled General Assembly removed some of its duties in an ongoing battle with Democratic Secretary of State Alison Lundergan Grimes.

Henry, the only Kentuckian ever to be chosen Miss America, said most of the duties of the Secretary of State are apolitical, and she plans to draw on her experience as former Commissioner of the Department of Veteran Affairs to see that it stays that way.

A native of Augusta, Henry has a degree in design and has started several small businesses. That process has showed her just how difficult it is to work through the morass of state forms, licenses and regulations required to get a business started.

She said one of her priorities if elected will be to make the website of the secretary of state more user friendly. She said that currently, people registering some business filings get halfway through the process and then have to wait for a mailed number before they can complete the forms. She wants to make that number available over the Internet, so businesses can complete their filing in one sitting. She said she also wants to make the office’s one-stop-shop for businesses easier to navigate, and make Revolutionary War documents more easily available to researchers and to schools.

She said her main hope is that she can help restore civility to state government. Being from a small town, she said, she appreciates the closeness and kinship people in Kentucky feel, and recently that kind of friendliness has disappeared from Kentucky politics. She said for that reason, she was uncomfortable at the annual Fancy Farm Picnic, the western Kentucky church picnic that every year features caustic stump speeches by Kentucky candidates. She said she made one shark joke when she started her speech, and then moved on.

“I think kindness should matter,” Henry said. “We shouldn’t have to diminish others to help ourselves.”

On leaving the newspaper, Henry went to Letcher County Central High School to speak to the class of one of her primary opponents, LCC music teacher Jason Griffith.