Mrs. Ison was proud to live her life ‘the mountain way’

By PHIL PRIMACK
and CHUCK SHUFORD 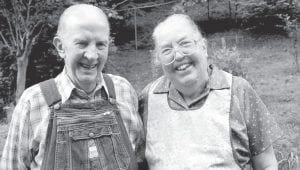 Clarence and Sara Ison were photographed at their home in the community of Ice.

Long-time Mountain Eagle correspondent Sara Ellen Caudill Ison of Ice was laid to rest April 25 in Kingdom Come Cemetery near the site of the “big one-room hewed log house nestled in the beautiful hills of eastern Kentucky” in which she grew up at the head of Cotton Patch Branch, as she wrote in My Mountain Roots Run Deep, her book about growing up in Letcher County. Mrs. Ison was buried next to her late husband Clarence, whom she married in 1938 and with whom visitors would see her holding hands on the couch of their small home in Ice until his death more than seven decades later.

Funeral services were held for Mrs. Ison, 92, at Letcher Funeral Home. Services were conducted by Bobby Dean Whitaker and others.

Sara Ison was the daughter of Jesse and Mary Miller Caudill. She is survived by one daughter, Pearline Neace of Ice; three grandchildren, Lesa Neace, Marsha Neace, and Anthony Wayne (Tammy) Ison; two great grandchildren, Jessica Nicole Ison and Dustin Anthony Tyler Ison; daughter-in-law Esther Ison and many other relatives and friends. She was preceded in death by her son, Tony Ison, and two grandchildren, MichaelandJCIson.

Sara Ison lived almost her entire life in Letcher County, always proud of what she called the “mountain way of life.” She was determined to graduate high school, even though it meant leaving her house before daylight in order to catch the train to Whitesburg long before school buses reached that part of the county. She would share such memories and observations in her regular Eagle column, also reporting about visitors, the weather, and other news. Her writing would remind readers of both the struggles and joys of growing up and raising a family through the Great Depression, war, and the booms and busts of the coal mining industry. Lacking even oil for light – let alone electricity – she recalled using Clarence’s carbide light to read by (he worked in the mines for more than 40 years).

Mrs. Ison recounted even difficult times with neither self-pity nor false nostalgia. “That’s just the way things were,” she would explain to visitors. She wrote that her home on Cotton Patch “did not have any locks on our doors, just a latch string on the outside and a wooden latch inside. No one ever bothered anything. We had many young friends who loved to hunt. We would be gone to church, they would kill squirrels and when we came back there would be a pan of squirrels, cleaned and in water ready for the pot. Many times we never knew who brought them.”

Clarence and Sara, who never owned an automobile, left Kingdom Come and moved to Ice in order to make it easier for their children to go to school. Well into his 80s, Clarence would go out to feed the chickens, tend to the hog, bring in coal for the Warm Morning stove. He and Sara tended to their large and neat garden in the back, raising enough tomatoes, beans, and potatoes to get them from season to growing season.

Their produce and other homegrown food showed up on the simple kitchen table in the back, where the Isons would welcome guests, including a second family of Eagle reporters, to a low-key feast of shucky beans, corn bread, potatoes, real cow’s milk and butter, and more. Today such food is dubbed “organic” and “free range;” to Sara, it was just “regular grub.”

Clarence and Sara remained devoted to each other all their lives. A woman of deep faith, she knew she would again join him. She ends her book this way:

“When we are called home by our Lord, we want to be laid to rest on the hill of the Ison graveyard that overlooks our beloved Kingdom Come creek of Letcher County. There my mountain roots will find their final resting place.” With the Lord. And with Clarence.