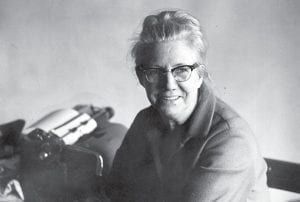 There was a time when The War on Poverty was more than just a slogan.

There were boots on the ground. Soldiers, if you will, who fought the forces of hunger and illiteracy and indignity.

Mabel Kiser was one of those soldiers.

A homemaker from Millstone who wrote a weekly community column in The Mountain Eagle, Mabel Kiser met the enemy, and she fought it with a needle and thread.

“It started out as nothing more than a place to collect clothes from people who didn’t need them, and distribute them out to people who didn’t have any,” said Tom Bethell, who was at the time an Appalachian Volunteer in Whitesburg.

At the height of The War, well-meaning people from all across the country sent boxes upon boxes of clothes to Appalachia. Bethell recalled once it was a box of men’s suits, all in odd sizes that ended up on Mabel Kiser’s doorstep. There were things that were useful, and there were things no one could use. But with a tiny grant from the Office of Economic Opportunity, Kiser changed that.

She turned them into dignity.

“She and other people would take these rags, and turned them into quilts and sweaters, and into things people could actually use,” Bethell said.

She hired widows too young for Social Security. She took kids to government meetings in other places and exposed them to a world outside of Letcher County. And her center clothed much of Letcher County. According to a Mountain Eagle report in 2013, Mrs. Kiser’s November 1967 report to the Office of Economic Opportunity included the following: “Since November 1, the Sewing Center has serviced 20 families. Many large families. One order contained 16 shirts, four dresses, and three pairs of pants… A total of 208 garments have been made, 75 of these were for the County Board of Education…. An average of five quilts per week are made from old woolen scraps, such as worn out pants, coats and skirts. These are ripped up and [NYC] girls put them together. Then the seamstresses bind the quilt edges from an old shirt if we have the shirts and if not we bind them with whatever we have on hand.”

That spirit of helping people with more than just money is the part of The War on Poverty that Bethell said was lost in the fog of another war.

“The tragedy was that Lyndon Johnson got himself caught up in Vietnam, and there was never the kind of emphasis on the War on Poverty that there was up to then,” Bethell said.