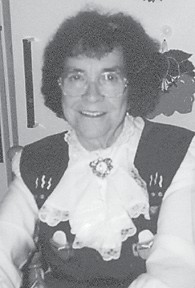 A daughter of the late Clark and Nancy Ann Cornett, she was the widow of Charlie Lewis and was a lifelong resident of Gordon.

She had been a member of Coyles Branch Primitive Baptist Church since 1949.

Funeral services were held April 6 in Benham. Burial was in the Lewis- Cornett Cemetery at Gordon.