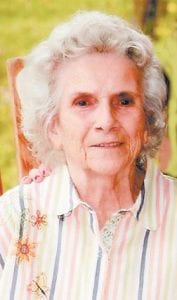 Funeral services for Mabel Ethel Wagner, 88, of Cram Creek will be held Friday at the Thornton Old Regular Baptist Church at Mayking.

Mrs. Wagner, widow of Jimmy Richard Wagner, died at her home Monday. Family members surrounded her. She had been ill for some time.

Funeral services will begin at 1 p.m. January 16 with Robert Wagner officiating. Visitation is set for 6 p.m. on Thursday, also at the Thornton Old Regular Baptist Church. Burial will follow in the Wagner Cemetery at Cram Creek.