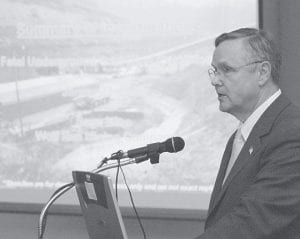 Mine Safety and Health Administration chief Richard E. Stickler spoke at a news conference last week in Buckhannon, W.Va., to detail the agency’s findings in the Sago Mine disaster. (AP Photo/Dale Sparks)

One or more lightning strikes likely caused an electrical current in a cable left deep inside the Sago Mine and touched off the methane blast blamed for the deaths of 12 coal miners last year, the federal Mine Safety and Health Administration said.

Lightning is one of three “root causes” the agency cites in its long-awaited investigation into the Jan. 2, 2006, explosion.

Lightning had been suspected from the start, but the report for the first time describes its likely path, saying an electrical current traveled through the earth to the 1,300-foot-long cable. Previous reports by the state and the mine’s owner, International Coal Group, Inc., mentioned lightning but not its route.

Electrical currents could have traveled through the earth to the underground pump cable, which functioned like an antenna, the report said.

“During a lightning strike, the insulated conductors of the submerged pump cable could receive volts as high as 20,500 volts,” the report released last week said. “This voltage would be of a short duration that the energy generated would be adequate to cause an arc and ignite methane.” 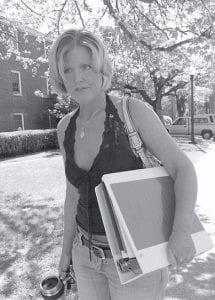 Atmospheric alarms in the mine sounded at nearly the same instant as a documented lightning strike, at 6:26 a.m. on Jan. 2, 2006. The National Lightning Detection Network recorded two lightning strikes near the mine – one a mile south of the mine’s opening, one a mile to the north.

Contributing to the blast, according to the report, methane levels inside the sealed section of the mine were not monitored, and seals used to close off that inactive section from the mine’s working area were not strong enough to withstand the blast.

MSHA is proposing emergency regulations for only the fourth time in its 29-year-history, requiring that mine operators remove insulated cables from abandoned areas before they are sealed, build stronger seals and monitor methane levels, among other things.

Richard Stickler, the agency’s director, said the proposed changes “will do a good job of providing additional protections to prevent another Sago accident.” He did not say when they would be implemented.

Relatives of some of the Sago victims questioned the report.

The explosion trapped a team of miners deep inside. By the time searchers reached them about 40 hours later, only one man had survived in the carbon monoxide gas.

The company idled the mine in March because of high production costs and low coal prices.

For mine company ICG, the report is vindication of its own investigation, said President Ben Hatfield.

“We hope this report provides some of the answers that the families of the accident victims need and deserve,” he said.

Although Sago was a nonunion mine, the United Mine Workers union participated in the state and federal investigations and issued its own report. The union’s experts believe the spark that ignited the methane gas came from friction between the mine’s deteriorating rock roof and the metal support system used to hold it up.

UMW President Cecil Roberts said that while the report shed some important light on the explosion, MSHA’s theory is “far-fetched” and not supported by physical evidence. However, he said MSHA should draft emergency regulations requiring miners to leave underground mines when lightning storms approach.