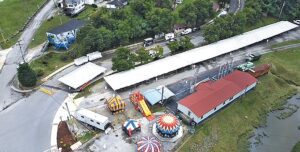 GETTING READY FOR FESTIVAL — Tents were erected, food booths were being moved into place, and the carnival was setting up when this photo of Mountain Heritage Village in downtown Whitesburg was taken by drone Tuesday afternoon. (Photo courtesy LCDpodcast)

The Mountain Heritage Festival makes its return this week after being canceled last year because of the pandemic.

Hayes’s single “Old Enough to Know Better” reached Number 1 on the Billboard Country Airplay Chart, and “On a Good Night” hit Number 2 in 1996. He gave up his solo career in the early 2000s to play in the backup band for former Alabama frontman Randy Owen, but was diagnosed with colon cancer in 2011. Hayes’s latest album, “Who Saved Who”, was released in December 2019. 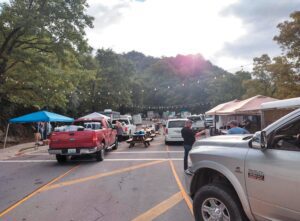 Judd retired in 2015, citing a desire to spend more time with his daughter. He also talked about having an addiction to cocaine, and being baptized and changing his life. He returned to music in 2018 with the single “Weight’s Going Up Down, Up Down”.

The shows are among four nights of concerts at the festival, which gets into full swing today after the first concert last night.

The big tent is already up, the carnival opens today, and festival committee Chairwoman Lee Bates Adams said things have mostly run smoothly after the hiatus, though it is difficult to find people willing to work this year. Even the carnival is offering $1,200 for a charity to help run children’s rides.

“So far it’s been good, lots of planning and things,” Adams said. “We have had a few people pull out and we understand that.”

WXKQ has pulled out of the talent show, the Letcher County Central High School cheerleaders have dropped the baby pageant, Appalachian Regional Healthcare is backed out of Down Home Night, and the Almost Home Shelter has canceled the dog show, Adams said.

Though some events have been canceled, other features of the festival will continue. Adams said groups running food booths have been asked to wear masks and gloves at all times, and to have one person only to handle money to avoid cross-contamination with food. Vendors under the tent have been asked to have hand sanitizer and sanitizing wipes available and to clean their tables often, Adams said. The tent booths are sold out, and Adams said that with the booths outdoors, the committee is hoping to minimize the risk of COVID.

She said the Whitesburg Letcher County Farmers Market is providing portable handwashing stations that will be placed throughout the festival grounds, also.

Events on the stage and the parade are the only large groups that are expected to be gathering, Adams said.

“Hopefully, people will be able to sit with their families and social distance themselves from other people,” she said.

Events with days and times are as follows:

• Whitesburg Day: Arts and Crafts and Food Vendors may bring a table and set up in downtown Whitesburg. Activities start at 8 a.m. and are over by 2 p.m.

Location: Meet at 148 Church Street at the Mountain View B&B at Noon

Led by Sam Adams limited to 15 people. Masks are required

Location: Meet at 148 Church Street at the Mountain View B&B at Noon

Led by Sam Adams limited to 15 people. Masks are required