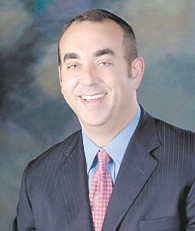 Assistant Letcher Commonwealth’s Attorney Kevin R. Mullins has been appointed by Gov. Steve Beshear as the replacement for the late Letcher District Judge James T. Wood Jr. generally most people’s first experience with a court system as it handles lawsuits where the amount being sought is less than $4,000, crimes involving less than one year in the county jail, probate matters and most domestic violence and child abuse cases.

“It is therefore extremely important to treat people fairly, respectfully and to follow the law,” he said.

Wood resigned as judge of the 47th Judicial District shortly before battle with diabetes.

“Judge Wood was an excellent judge and I am also pleased to continue the juvenile drug court program established by Wood,” said Mullins. “While assistant commonwealth’s attorney, I have learned a lot about the problems facing Letcher County, especially those involving drug trafficking.”

Mullins is one of three candidates who have announced they will run for a full-term as district judge in the Nov. 2, 2010, election. Opposing Mullins are Whitesburg attorneys James Hubbard and Frank Riley.