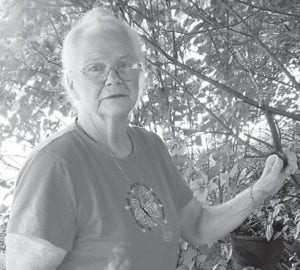 One of the best known and most loved citizens of Jenkins is Mary Ann Mullins, who resides at Burdine.

With her broad smile and bubbly personality, she has been active for many years soliciting support for one cause or another whether it is for food baskets and clothing for needy families or Christmas presents for the residents of the Veterans Home at Hazard.

She is an outspoken person who will tell you up front, “I will say what I got on my mind and I don’t mince words; if you don’t like it you don’t have to listen.”

Whether you agree with her or not, you have to admire her spunk and her integrity. More recently she has worked tirelessly to get funding to install the World War II Veterans Monument in Jenkins.

Mullins was born in 1938 at #3 Gaskill and has been a lifetime resident of Jenkins. Her parents were the late Arietta Greer Mullins and Burley Mullins; she has three brothers and a sister. She and her late husband, Carlos Mullins, a Korean War veteran, were married for 50 years before his death in 2006. They had three sons, Roger, Tim and Shawn. She also has four grandsons, a granddaughter and four great-grandchildren.

Mullins is a member of Burdine Freewill Baptist Church, Eastern Star at Jenkins, and the Ladies’ Auxiliary of the American Legion where she is a state appointed liaison to the VA Home at Hazard. She has also been involved with the Burdine Elementary School where she is known as The Quilting Lady. On many occasions she has exhibited her quilting skills to the school kids.

Her hobbies are quilting and canning. Each year she fills her cupboards with delicious homemade jellies, jams and vegetable and proudly shares them with her immediate family and closest friends.

When Mary Ann and Carlos Mullins were married in 1956, he was a member of the American Legion in Jenkins. At that time the organization did not have a Ladies’ Auxiliary. In 1977 its charter was reinstated and she has been an active member ever since.

During World II hundreds of young men and women from Jenkins answered the call to fight for world peace in Europe and in the Pacific. Mullins had two uncles who had served in the military during that era. For many years she had discussed with anyone who would listen the need to honor those veterans with a monument.

Seven years ago she discussed the idea with Magistrate Wayne Fleming, who is a Viet Nam veteran. They approached State Representative Leslie Combs, who is a tireless worker for all honorable requests from citizens. Soon thereafter Combs called Mullins and said, “Granny, I got your money for the monument and it is carved in stone; nobody can take it away from you”. Over the past six years there have been delays because a main water line in downtown Jenkins was installed under the area where the monument was to be installed. When the Phase I Water Line Project was being designed, Nesbitt Engineering rerouted the new line so the monument could be installed in the median adjacent to the David A. Zegeer Coal-Railroad Museum.

On August 25, the new monument will be officially dedicated with a ceremony beginning at 11 a.m. Many World War II veterans from far and near will be present for this great event.

Mullins says there has not been a month gone by in the past seven years that someone has not called her to give her the name of another veteran from Burdine, Jenkins or Dunham. Nearly 600 names have been submitted and their names will be carved in granite as a lasting tribute to those who served the country during this Great War.

The Jenkins Homecoming Days Festival Parade will begin at noon and the World War II veterans will be the official grand marshals who will lead the parade. Mullins, who has started this initiative and brought it to fruition, will also be in the parade. Later in the afternoon at 3:30 p.m. at the Robert ‘Pud’ Shubert Park, she will be presented with the prestigious Outstanding Citizen Award presented annually during the Jenkins Homecoming Days Festival. No one could be more deserving.