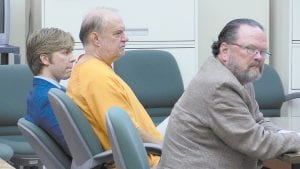 AT BOND REDUCTION HEARING — Emory “Fudge” Mullins, center, appeared with his attorneys at a bond reduction hearing that resulted in Mullins’s bond being reduced by half to $50,000 cash. Mullins last week withdrew as the Democrat Party candidate for the office of Letcher County magistrate in District Three. Party officials are still holding out hope they can field a candidate for the race. (Photo by Chris Anderson)

A former candidate for Letcher County magistrate is still in jail after Letcher Circuit Judge James W. Craft II reduced his bond by half, but he’s no longer a candidate.

Meanwhile, the Letcher County Democratic Committee is still trying to figure out what to do about the race after he pulled his name off the ballot last week.

Emory “Fudge” Mullins, 62, of Neon, who was arrested last month on child sex abuse and child pornography charges, filed his withdrawal papers with the Letcher County Clerk’s office on Thursday.

The committee had already been in a quandary about what to do in that race, since the candidate has been in jail since June 18. There is no provision in Kentucky law for the party to replace nominees from the ballot unless they die, become incapacitated or no longer qualified to run. County Chairwoman Carolyn Lewis said they have also been told there is no way to replace someone who voluntarily withdraws from the ballot.

Mullins’s withdrawal from the race came the same day he was scheduled at a bond reduction hearing. Mullins was being held on a $100,000 cash bond. The judge did not rule on his request to reduce that amount that day, but filed an order Tuesday (yesterday) reducing it to $50,000 cash. He was still in jail Tuesday evening.

In addition to child sex abuse and child pornography charges, Mullins is charged with retaliating against a witness. Mullins was the running for District 3 Magistrate.

The Letcher County Democratic Committee met later that night to discuss what to do about the vacancy on the ballot, but took no action. Lewis said she has been told by the Kentucky Secretary of State’s office that the committee cannot fill the nomination because Mullins was opposed in the race. Republican Maverick Cook and write-in candidate Debby Collier, a Democrat, are also running for the vacant seat. Mullins beat incumbent Woody Holbrook and former magistrate Codell Gibson in the primary.

While some members of the committee discussed endorsing Collier, committee member Randy Tackett, an attorney, said another write-in candidate could also enter the race, and the committee might still be able to place a candidate on the ballot.

“If there is a method by which we can put a candidate on the ballot, we have to do that,” Tackett said. “We don’t endorse any write-in candidates.”

He said no one, including others who ran in the election have “any special position” to be added to the ballot after another resigns.

A second write-in candidate had registered to run by the close of business that day. Bobby Webb of Highland Branch at Haymond also registered. Webb is also a registered Democrat.

Write-in candidates traditionally have trouble being elected because their names don’t appear on the ballot.

Collier said at the meeting last week that she has printed brochures explaining how people can cast a write-in vote, and has given out t-shirts and cards. She also said she has made personal contact with about 1,000 voters in the district. There were 1,586 votes cast in that district in 2014.