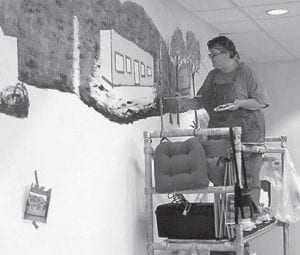 Sue Greer-Pitt, a faculty member at Southeast Kentucky Community and Technical College, is painting a mural in the lobby of Caudill Hall on the Whitesburg Campus. The mural, which will be completed by late August, features scenes of the campus and images of students. The project commemorates the 20th anniversary of the creation of the college in Whitesburg. A formal celebration is slated for September. (Photo by Chris Jones)