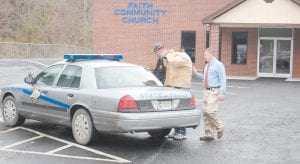 Murder suspect Christopher P. Smith used his coat to cover his head from a photographer Tuesday as he was being helped into the back of a Kentucky State Police cruiser for transport to the Harlan County Jail. Smith surrendered earlier in the morning to Letcher County Sheriff Danny Webb. (Eagle photo)

Clark and a 13-year-old escaped. The KSP press release said Smith was driving a 1997 black Ford F-150 pickup truck and was considered armed and dangerous. 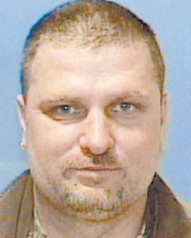 Smith waited in the sheriff’s department until KSP detectives came and took him into custody.