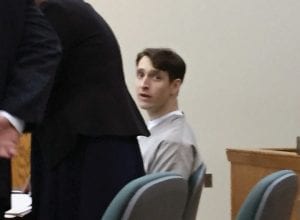 Trial for James Richard Huffman IV, pictured here, is scheduled to begin in Letcher Circuit Court on Monday, December 4. Huffman is one of two men charged in the January 1, 2014 stabbing death of Michael Hogg.

That was the text message from Caleb Hogg to his brother after two men stepped out of a carport on Church Street in Whitesburg in the pre-dawn hours of Jan. 1, 2014.

One was wearing a long coat, the other a bandana. One carried a knife. While they didn’t threaten the man, they asked him to drive them to meet the parents of one of the men, who were supposed to pick them up. They had been in a fight, and didn’t want him to call the police, Letcher Commonwealth’s Attorney Edison Banks said at a hearing Nov. 17.

The witness didn’t know police were already looking for two men fitting that description for allegedly holding down and stabbing Michael Hogg, who was no relation to the witnesses, multiple times on a street in downtown Whitesburg. But they set off alarm bells in his head, and he sent a quick text to his brother.

His father came out with a gun, the witness told police, and the two men left, Banks said in court Friday.

At 4 a.m., Whitesburg Police Officer Justin Hunsucker arrested the two men who had been lurking on the carport in the parking lot of the Letcher County Recreation Center, where Michael Hogg’s panicked friend, Samantha Mullins, hid her Jeep Wrangler in an alley after attempting to drive Hogg to the hospital on four flat tires. Police say one of the accused punctured the tires with a knife to prevent them from getting away.

The text message is one of at least two pieces of evidence defense attorneys want the court to suppress when trial begins Dec. 4 for James Richard Huffman IV, who is accused to stabbing Hogg eight times, and Patrick C. Smith, who is accused trying to break into the Jeep where Hogg and his friends took refuge after the stabbing, and chasing it down the street.

Huffman will be the first of the two suspects to face a jury in the stabbing, which occurred after a New Year’s Eve party at Streetside Bar and Grill. Trial has been delayed indefinitely for Smith, pending the completion of Huffman’s trial.

The defense and prosecution last week renewed several motions they had already made, then defense attorney Robert F. Wright made two surprise motions — one to suppress the screenshot picture of the text message, and another to suppress any testimony based on a diagram supposedly drawn by Mullins to show police where and how the stabbing took place.

Wright told the judge he had never seen the text message until the day before the hearing, even though Banks had told him in March that he had given him all of the evidence. In fact, Wright and co-counsel Steven Owen said, they hadn’t seen anything about the brothers’ encounter with his client on the night of the murder.

“If there are statements like this, I haven’t seen them,” Owen said.

Banks, however, said it was only the photo of the text that the defense had not seen.

He said the lead detective had missed getting the photo originally, though he did see it. Banks said he got the photo the night before Banks sent it to the defense, while he was serving subpoenas and one of the brothers remembers sending it to him that night.

While the defense maintained they didn’t get the reports, Banks read aloud from a document he said he sent it last spring.

“I didn’t give you a typed statement, I gave you the original, plus the police report,” Banks exclaimed.

“I asked for everything,” Wright responded, “and I didn’t get it.”

“Is Detective Abner going to keep remembering things the day of the trial? When does it end?” Wright asked.

Banks said the detective received a picture of the day before and emailed it to Banks that day. Banks said he sent it on to Wright and Owen as soon as he got it. And while defense attorneys said they didn’t know about it, Banks said it was also listed in the subpoenas he issued.

“Why do you think I subpoenaed the text?” he asked.

Special Letcher Circuit Judge Kent Hendrickson said he didn’t see any harm in allowing the text, since it was already directly quoted in the police report and in a witness statement, and he did not agree to suppress the evidence.

The defense also objected to a diagram they say was created by Mullins at the time of her interview with police.

“I have been told by Mr. Banks that Detective Abner neglected to collect that diagram,” Wright said, saying it is mentioned in the police report and he has asked for it repeatedly. “I will ask again if that diagram exists.”

If it does, Wright said, he wants Banks to produce it, but if it does or doesn’t exist, at this point it should be kept from the jury.

“You say if it exists, well it could exist in a trash can somewhere, but I can’t do anything about that,” he said.

Wright, however, said if it “were to turn up, it would be subject to exclusion.”

“He (Det. Abner) had a blue pen he made notes with,” Banks snapped. “Am I supposed to produce that?”

Hendrickson agreed, telling Wright he would have to ask the detective about the diagram on the witness stand if he wanted to know anything else about it.

The hearing on Nov. 17 was the last chance for attorneys to make motions before trial. Both sides renewed several motions made before, and the judge said he will rule on anything left after jury selection.

Among the motions made by the defense was a motion to call new jurors from all over the county, saying the majority of those selected were from within a one-mile radius of the murder. The judge declined to make that ruling in April, saying he had called 30 additional jurors and, “I fail to see why the urbane people of Whitesburg would be better informed or have seen more publicity than anyone else in the county,” Hendrickson said. He refused again Nov. 17.

The judge will also rule after the jury is selected whether former Kentucky State Police Trooper Eddie Crum of Pike County can be considered an expert witness in a homicide case. The defense says Crum, now a deputy sheriff in Pike County and a private investigator, has been qualified as an expert witness in several courts, however Banks says Crum was qualified as an accident deconstructionist, not a homicide investigator.

The trial has been delayed multiple times as attorneys have made several motions stalling the case. It was last set for trial in April, but was canceled at the last minute when defense witness Larry C. Stidham of Jenkins died in one-car collision the day before the trial was to begin. Stidham had a child with prosecution witness Mullins, and the judge delayed the case due to the disruption for both sides.