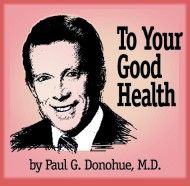 DEAR DR. DONOHUE: During my recent physical exam, my doctor said I had a heart murmur but not to worry about it. I decided to go to my heart doctor anyway. He did an EKG — normal. I had a stress test last June — normal. He states that many people my age, 87, have heart murmurs. He said he would watch it.

Do I have a dangerous heart problem? I play tennis three nights a week and exercise with weights a few times a week. My weight is perfect for my height. I sleep well. My wife cooks without salt, and we watch our sugar intake. I take one pill for high blood pressure and one pill for an enlarged prostate gland. — R.E.

ANSWER: An 87-yearold with a dangerous heart problem could not play tennis three times a week and lift weights even a few times a week. You have no symptoms. You have a normal EKG and had a normal stress test. Your heart health must be good.

When doctors listen to hearts with a stethoscope, they hear a “lub-dub” sound due to the closing of the four heart valves. Murmurs are noises heard between those two sounds. Often they indicate narrow or leaky heart valves. The murmur comes from a disturbance in blood flow due to the abnormal valve. It creates eddy currents in the blood, which generate sound. However, eddy currents arise for other reasons, some of which have nothing to do with heart valves. Older people often have such sounds, i.e., murmurs. Those sounds are innocent murmurs.

Even if your murmur is a sign of valve damage, the damage must be slight. You have no symptoms. You are more active than people half your age. The chance that a slightly damaged valve in someone 87 years old would progress to a dangerously damaged valve is most unlikely.

Readers who would like more information on heart valve disease can order the booklet on that topic. Write to Dr. Donohue — No. 105W, Box 536475, Orlando, FL 32853-6475. Enclose a check or money order (no cash) for $4.75 U.S./$6 Canada with the recipient’s printed name and address. Please allow four weeks for delivery.

DEAR DR. DONOHUE: For four years I have been dealing with lichen planus. Is there any new treatment? — J.P.

ANSWER: Lichen planus is most often found on the skin of the wrists, ankles and legs. It can also find its way into the mouth. The genital skin is another target. It starts as flat-topped, manysided, small red patches that can merge into a larger patch. The color turns purple. White lines crisscross the surface of the patch. The outbreak is intensely itchy. A cause hasn’t been identified, but it might result from an immune system gone berserk. Sometimes it’s seen in conjunction with another illness, like hepatitis C.

The strongest varieties of cortisone creams and ointments are the usual treatment. Many patients are free of the condition in a year or so. To prevent relapses, some have to keep applying the ointments on a less-frequent basis once the skin has cleared.