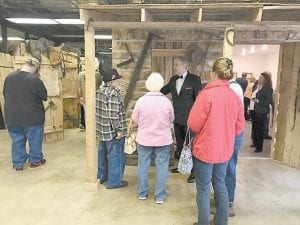 Hatfields and McCoys mingle peacefully in the mountainous region where their families waged one of America’s most famous feuds. Now a museum near the Kentucky-West Virginia border is showcasing artifacts bringing the struggle back to life.

Items on display include bullets fired by the warring families, a gun found at a battle site and fragments of Randolph McCoy’s cabin, destroyed by the Hatfield clan in an infamous 1888 New Year’s attack, said the museum’s curator, Bill Richardson.

The museum houses the largest collection of Hatfield and McCoy relics anywhere, he said.

“People who have heard about this story or seen it on television or read a book about it, they can actually see the real artifacts and documents,” Richardson said. “If you want to go from fiction to fact, this is where you can do that.”

Courtney Quick McCoy said she’ll probably have goosebumps when she looks at relics from her family’s feud with the Hatfields.

“You know that you are as close to your family as you ever could be,” she said.

The museum, in a former schoolhouse, is a short drive from many of the tragic events from the long feud, including the site of the Mc- Coy cabin on the Kentucky side that was burned and two McCoys were gunned down in the New Year’s day ambush. Hatfield family members and supporters were thrown in jail after the attack, and the hostilities soon ended.

“We’re at ground zero,” Richardson said. “Everything you could possibly want to see and do and learn about this story, you can get it right here and get it in a day.”

Many believe the backwoods blood feud was rooted in the Civil War, but the bitterness was perpetuated by disputes over timber rights and even a pig.

Historical markers on both sides of the state line describe many of the pivotal events. Summer bus tours take visitors to some of the key feud sites in both states.

Other museum items include the burial records for “Devil Anse” Hatfield and other Hatfields, the deed for a contested 5,000 acres of land that some believe started the feud and arrest warrants for the Hatfields.

The museum also features coal mining artifacts in a nod to the region’s rich coal heritage.

Hatfields and McCoys might even go together to see the exhibits.

“It means a lot to us,” Cecil Hatfield said. “What we’re doing is teaching the history of it.”

Richardson continues scouring for feud relics and hopes the families will offer items for display.

To show how the truce has stuck, Courtney Quick McCoy is partnering with a Hatfield in a whiskeymaking venture — called The Legendary Hatfield & McCoy Family Brand Whiskey. The whiskey is based on a Hatfield recipe and a McCoy recipe that’s blended, she said.

“The Hatfields and the McCoys, we now travel together, hang out together, drink together, work together,” she said. “I guess you’d say we even play together.”