The JOE MANDAK
The Associated Press 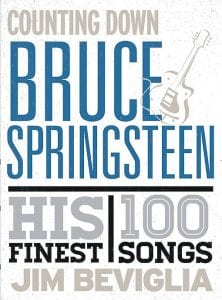 Music blogger Jim Beviglia is trying to do far more than start arguments with his latest book, “Counting Down Bruce Springsteen:

His 100 Finest Songs.” He ranks Springsteen’s officially released studio recordings song by song from No. 100, “The E Street Shuffle,” to the predictably No. 1, “Born to Run.”

“Sometimes the obvious choice is obvious for a reason,” Beviglia argues in support of his cliched top pick. Overall, six cuts from the eight-song “Born to Run” album made Beviglia’s list, all ranked No. 19 or better.

Fan faves like “She’s the One,” ‘’Ramrod” and “Something in the Night” are missing, while “Cautious Man,” ‘’Zero and Blind Terry” — and even “Outlaw Pete” — made the list.

Beviglia reviewed every studiorecorded song Springsteen has “officially” released, the lone exception being “American Skin (41 Shots),” which debuted on a live album chronicling the tour when it was written.

Some ranked songs come from after-the-fact compilations like the 66-song “Tracks” box set or “The Promise.” Both include songs left off original albums, which nonetheless became known to fans through bootlegs or wordof mouth from live performances.

Only a few artists record enough songs to even make the “100 Finest” treatment worthwhile. Beviglia’s first book ranked Bob Dylan’s Top 100. Next up: The Rolling Stones. For some perspective, The Eagles, one of the largest-selling bands in the world, have released barely more than 80 studio-recorded songs.

And before streamlining his songwriting and recording on more recent releases, Springsteen commonly recorded more than 60 songs for some albums, before choosing the 10 or 12 that would make the final cut.

Beviglia found himself drawn to some of Springsteen’s more contemplative work — eight of 10 songs made the top 100 from the “Nebraska” album, an acoustic demo Springsteen recorded at home on a four-track tape machine. But songs featuring the E Street Band in full flourish, with notable contributions by late members Danny Federici, the organist, and saxophonist Clarence Clemons are well represented, including several on relatively recent albums, 2007’s “Magic” and 2009’s “Working on a Dream,” which drew a lukewarm response.

The latter album opens with an eight- minute, tongue- incheek Western opus, “Outlaw Pete,” which, Beviglia notes, has been nicknamed “Out to Pee” because some fans head to the restroom when Springsteen plays it live. The song ranked 79th on Beviglia’s list.