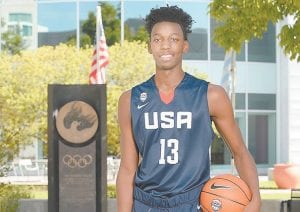 THE BEST OF 2019 — James Wiseman, the top player in the 2019 recruiting class, plays with a “chip on his shoulder” that Kentucky coach John Calipari likes.

Many speculated that the Music City Bowl would back off Kentucky because of the basketball game conflict. However, western Kentucky fans have always been very supportive when UK plays in Nashville.

Bowl officials are anticipating something will be done — perhaps at the stadium — to make it easy for UK fans to watch the basketball game before the bowl game.

“The UK administration needs to do everything that it can do to promote the bowl game and show that in spite of a horrible finish to the season that the fans will still come to a bowl game to support its team,” one official from another bowl told me. “UK officials need to repeatedly preach this because the Music City Bowl is really believing in UK fans.”

Kentucky sophomore lineman Landon Young knows fans might have doubts about the team after the losses to Georgia and Louisville to end the season. But he says fans will not be disappointed when they attend the bowl game.

“We didn’t like the way the season ended, either. We have the hurt, the drive to change that,” Young said. “Come to the bowl game and you will see that.”

There’s not any one thing that former NBA star Penny Hardaway thinks 6-9 James Wiseman does best for Memphis East. But that’s because he can do so many things well that it is hard to pick which one he does the best.

Wiseman is a major Kentucky recruiting target in the 2019 class.

Aspire Academy junior Charles Bassey played against Wiseman in the Marshall County Hoopfest Sunday and had played against him several times before including the Underclassmen All-America Game last spring. Wiseman is the No. 1 player in the 2019 recruiting class, Bassey a top five player. Wiseman had 21 points on 9-for-17 shooting along with 10 rebounds and two blocked shots in an 82-66 win over Aspire.

“Wiseman can shoot the ball. He pops out and shoots. He posts good. He is a really good player,” Bassey said. “You have to go hard against him every minute.”

Hardaway says that trait is one thing Calipari — and a lot of other coaches who have offered scholarships — like about Wiseman.

“He is a kid that plays with a chip on his shoulder. He knows what he wants in life to make it to the next level and he is not going to go out there and do anything halfway. Everything he does, he goes 100 percent,” Hardaway said.

Paul Washington, the father of UK freshman P.J. Washington, was also at Marshall County Hoopfest with his team, Findlay Prep. He’s watched Wiseman for three years and says he has “definitely” got better this year.

“He is tall, athletic. He needs to work on his physicality and Penny is doing a good job with that already. He is going to be special,” Washington said. “I just like his presence. He can block shots around the rim. That is what I like most about him. He just knows how to play the game.”

Olive Branch (Miss.) junior D.J. Jeffries, a top 15 player in the 2019 recruiting class and another UK target, also played at Marshall County Hoopfest where he scored 35 points in a win over Adair County. He called Wiseman a “great player” with few limitations.

“He has nice little jump shot and a great feel for the game. He’s a nice all-around player. Playing with James, he gets me better and I get him better,” Jeffries said.

Could they play together in college since they are similar players?

“Of course. I talk to him sometimes about that. You never know,” Jeffries said.

“Sacha has been part of a lot of the work I have done with professional players. Sacha himself is exceptionally skilled. A lot now is just letting his body catch up physically so he can show you all he can do,” Abraham said.

“He shoots it, rebounds, passes well. Probably one of his best things would be as a pick-andpop player because he can score both inside and outside. Not every player his size can do that,” Abraham said.

“Last year he was young and was just so excited. He was just flying around. Now he has settled in and is doing what he should be. He is just playing free and you are seeing a lot more of his athleticism.”

Killeya-Jones was a McDonald’s All-American and consensus top 25 player nationally. He was the state player of the year in Virginia as a senior and won a state high school championship. He also won two AAU national championships. Kansas, North Carolina and Florida were three of the schools who pursued him the hardest after he de-committed from Virginia, along with Kentucky.

Through eight games, Killeya- Jones is averaging 4.9 points and 4.4 rebounds per game. He’s third on the team with 10 blocked shots. He’s also shooting 54.8 percent from the field and has shown he can hit the open 15-foot shot.

“I am glad he is starting to get a chance to do a little more at Kentucky. The biggest thing I talked with him about was just carving out a niche. On any team, you have to see what the team needs from you. Maybe what everybody else is not willing to do but you can do,” Abraham said.

“Then you know if you do that, the coach cannot not play you. For him, it’s rebounding and being a defensive presence. Doing that then leads to chances to do other things. You do one thing exceptionally well like rebound or play defense, then it opens all those other things.”

What an amazing comeback the Kentucky volleyball team had last week when it lost the first two sets to Western Kentucky in the NCAA Tournament second round before rallying to win three straight sets. That puts UK into the Sweet Sixteen where it will host BYU.

Senior Kaz Brown credited UK fans for helping revitalize UK when it was down 2-0 but also said the team’s veteran players know how to stay focused on the moment.

“I think that was massive for his match (against Western Kentucky) just because it’s easy to get ahead of yourselves in those ones. Especially going down 0-2, it’s easy. You just have to take it one point at a time. There’s nothing you can do. No matter how spectacular the play is, it can only get you one point,” Brown said after the win.

“We have a lot of young kids out there, but they don’t show their age at all. They’re remarkable and I think everyone saw that tonight. This team is really special. I love this team, and I’m going to do everything in my power to keep playing with them. This team plays to win at all times.”

Former WKYT-TV sports anchor Rob Bromley interacted with a lot of UK football and basketball coaches during his 40-year career that recently ended with his retirement.

“I came to Lexington in 1977 and had never run into monster egos. Was I ever in for a shock,” Bromley said when asked about being the host for the UK coaching shows for so many years on WKYT.

He says he felt “lucky” to have had Joe Hall as UK’s basketball coach when he started.

“He was fantastic. He treated me like I was part of the program,” Bromley said. “We did the show his last five years of coaching.”

Bromley “got along well” with basketball coach Eddie Sutton. Next came Rick Pitino.

“He had a monster ego. Things could change very quickly with him. He could be so good to you and at other times not so good,” Bromley said. “It could be like day and night. It made for some interesting years with him. Then came Tubby (Smith) and he was a completely different personality and just a great guy.”

Bromley understood for years that Kentucky fans get their first look at game footage on the coaching shows because few games were televised 30 years ago.

“We would shoot a game on Saturday, fly back into Lexington and do the show on Sunday and it would be the first opportunity for game footage to be on Lexington TV,” Bromley said.

Bromley leaned on coworker Steve Moss. They worked together over 30 years.

“It helps having people around you that you get to know and can depend on. He was a good friend and great worker,” Bromley said.

Kentucky’s last two regular season games were blowout losses to Georgia and Louisville. What impact will that have on recruiting, especially with the new early signing period starting in about two weeks?

“I don’t think that will be an issue at all. We’ve got a solid class. We’ve been recruiting at a very high level. Guys are excited to come here,” Kentucky coach Mark Stoops said.

He noted that teams Kentucky recruits again had their own ups and downs during the season.

“I know I’m not happy, and you’re probably not happy, and most of us aren’t. But it’s not like, — there’s going to be somebody who wins and loses in every game,” the UK coach said.

He expects most, if not all, of UK’s verbal commitments to sign this month rather than wait until the traditional signing period in February.

Sophomore tackle Landon Young says there’s no reason for recruits not to sign with UK.

“It is still going up. Even from last year when we had a seven-win season, we still have a possibility of an eight-win season (with a bowl win),” Young said. “Every year under coach Stoops is getting better and that is just going to continue.

“We are a handful of plays away from having nine or 10 wins this season. For them (recruits) to see that, that’s what they really have to look at. Our program is still going up and I can’t wait to have some of these talented recruits on our team.”

Quote of the Week: “I think he’s more of a streaky shooter than (former UK point guard) Brandon Knight because he could make everything. This kid gets in a groove, though, and you can tell he feels it. I just don’t want to see him keep missing some good shots and then quit shooting. Don’t let that bother you,” Kentucky Radio Network analyst Mike Pratt on freshman Quade Green.

Quote of the Week 2: “He will be remembered for changing the culture and giving all that he’s got. I think that’s something that our class has done well and he’s maybe the biggest reason for that,” Kentucky linebacker Courtney Love on quarterback Stephen Johnson’s UK legacy.

Quote of the Week 3: “We are doing okay, but we have a lot of work ahead of us. The SEC is as good as it has been. The league is loaded. That’s all you can really say,” LSU men’s basketball coach Will Wade about what lies ahead in conference play.