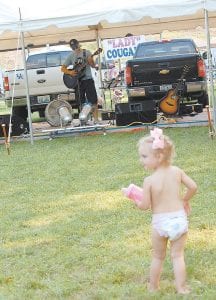 Layla Holbrook, 2, danced as Whitesburg musician Kori Breeding performed. Layla, of Rutledge, Tenn., is the daughter of Jessica Holbrook and Garrett Elkin. Her grandmother is Laverne Bentley of Jenkins.

Organizers of an all-day music festival say $5,000 was raised Saturday to benefit the Letcher County structured classroom for autistic children.

Whitesburg physician Van Breeding, who helped organize The Agrestic Music and Arts Festival, said the fund-raising goal was met, despite the event being held on an extremely hot day. He also said the Memorial Day weekend and hard economic times contributed to a lower than expected turnout.

“We would have liked to have had a bigger turnout for sure,” said Breeding. “Overall, we had great participation. Everybody was real positive. We had no incidents and no complaints.”

Fifteen diverse bands performed during a 12-hour period at River Park in Whitesburg on May 26. Alternative rock bands Amend the Broken and We Killed Vegas took the stage as well as Bak to Bak, a soul/Southern rock group. Idletime, a ‘70s rock group, Southern rock band Pure and Simple, and Atomic Solace, an indie rock group, also performed. 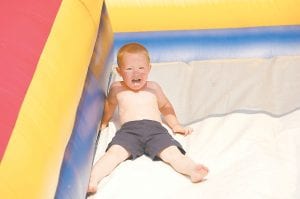 Two-year-old Landon Bledsoe enjoyed playing on an inflatable at the Agrestic Music and Arts Festival at River Park in Whitesburg on. Landon is the son of Brittany Bledsoe of Cumberland and the grandson of Chuck Bledsoe of Whitesburg. The festival raised $5,000 for charity.

Breeding said about 300 people, the largest crowd of the day, gathered around 8 p.m. for David Tolliver of Knott County, a member of the country music duo Halfway to Hazard.

“Some of the bands that were there said they can’t wait to come back next year so that pleases us to know we did something right to make them want to come back,” said Ashley Sexton. “We cannot wait to get started working on next year’s (event).” 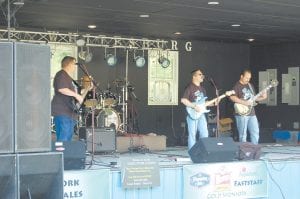 The Pure and Simple Band performed at the Agrestic Music and Arts Festival at River Park in Whitesburg on May 26. The Letcher County band consists of lead vocalist and guitarist Mike Wright, Travis Fields on lead guitar and vocals, Cory Branham on drums and Robert Barnett on bass guitar.

Breeding said the next event may be held during an evening and consist of three bands and a headliner.

“An all-day event is just too long,” said Breeding. “It was such a hot day.”

A check for the structured classroom for autistic children, which is located at West Whitesburg Elementary School and was formerly located at Fleming- Neon Elementary School, will be presented to the Letcher County Board of Education at its June meeting.