Owner of famous record store closing doors after parts in films 'The Hangover' and 'I Love You, Man' 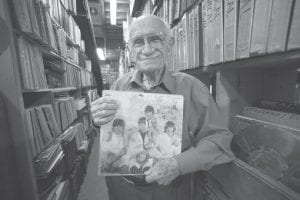 Music collector Murray Gershenz held an album by The Beatles as he posed at his store, Music Man Murray, in Los Angeles. Gershenz who claims to have the world’s largest commercial catalogue of LPs, 45s, 78s, CDs, cassettes and reel-to-reel tapes of pop, classical, rock, folk, blues and soundtrack music from all years across the 20th century, is closing up his Hollywood shop after nearly 50 years, saying that at age 87 he wants to try his hand at acting. (AP Photo)

The 45s, the 78s, the vinyl LPs, the CDs are all spinning to a halt, and you can push the stop button on those old cylinder recorders.

Music Man Murray — who for almost a half-century has been L.A.’s go-to-guy for that elusive record, the one you spent years searching in vain for until you found Murray — is closing up shop and selling his collection of some 300,000 discs. Everything must go, from the rare 10-inch vinyl LPs, to the even rarer 19th century Edison cylinders. Even that framed, mint-condition “Yesterday and Today” album by the Beatles, the one with the notorious “butcher cover” that makes it worth thousands of dollars, needs a home.

No, says Murray Gershenz, an energetic man of 87, he’s not getting too old to run Music Man Murray’s. Truth is, he says, his budding career as a character actor is finally taking off and he just can’t devote the time anymore that a record collection like his deserves.

So someone else will have to keep watch over those ancient and fragile discs like the 100-year-old 78s recorded by Swedish opera singer Sigrid Onegin.

“Great singer, absolutely phenomenal,” he says, respectfully, holding one lovingly in his hands.

Then there’s the priceless Kenny & the Cadets 45 (one of those small plastic records with the big hole in the middle). Only a few copies were pressed in 1962 before the group’s core members became much better known as the Beach Boys.

Gershenz is hoping a deeppocketed music industry figure or an institution might buy his collection and keep it intact. Short of that, though, he’ll sell it piecemeal.

If he has any regrets, it’s that one of the last of the old brick-andmortar record stores is closing as the business continues to move online.

For years his store has drawn everyone from musicians to wealthy collectors to average folks just trying to resurrect childhood memories.

“Oh man, he had everything,” recalls veteran L.A. musician Chuck E. Weiss, who visited the shop regularly when he first arrived in Los Angeles in the early 1970s. There, Weiss says, he discovered a trove of old 78s by blues legends Robert Johnson and Charlie Patton and pre-World War II jazz recordings by Louis Armstrong.

If he were younger and had more time, Murray says, maybe he would stick around and try to reissue some of his rarities on CD.

But for now the movies are calling. He’s had two box-office hits showing in theaters this year, “I Love You, Man” and “The Hangover.”

Oh sure, he wasn’t the star of either one, but every time someone recognizes him as the old guy being manhandled in that Las Vegas hospital in “The Hangover,” they laugh. He’s got another film in production and a recurring role on television’s “The Sarah Silverman Show.”

Not that Gershenz, a modest man with a bushy mustache and a wispy fringe of white hair that frames a speckled bald head, wants to sound like he’s bragging. Fact is, the one-time wannabe opera singer says, he doesn’t know how he went from taking improv classes in his spare time a dozen years ago to becoming an in-demand character actor — not any more than he can explain how he became Music Man Murray.

“I started out hoping to be another Pavarotti, and it just didn’t work out,” he says, unleashing a staccato laugh as he sits in a swivel chair in his small office, a stack of old, unsheathed 78 records at his feet.

As he spent years pursuing his dream, he managed restaurants, drove taxis, even packed parachutes to support a wife and three kids while taking singing lessons, collecting sheet music and buying records, lots and lots of records.

Eventually he began a successful career as a cantor. It didn’t quite pay the bills, however, so he began buying and selling records on the side. Music Man Murray’s was born in 1962, the name supplied by a friend who told him simply, “You’re a music man and your name is Murray.”

He began wheeling and dealing at a rapid pace — and often as not getting ripped off.

“The customer comes in many times when I was first starting out and says, ‘Oh I’ll buy this one, give you 50 cents,'” he recalls. “And as they were walking out the door they’d say, ‘Ha, ha, this thing’s worth 10 dollars.’ I swear to God, I wanted to kill them.”

Eventually, though, he figured out who groups like the Beatles were — “I appreciated them later, not when they were that famous” — and started making money as people started finding the store.

But in three to six months, Gershenz says, that era of his life will be over.