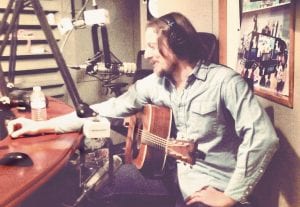 This photograph of country music singer and Breathitt County native Sturgill Simpson was taken earlier this year he performed in New York City for the “Outlaw Country” channel for Sirius XM Radio. Simpson, whose style is being compared to the late Waylon Jennings among others, will perform in Whitesburg Friday.

“You sound great and you sound country and I love it.”

Those were the words country musician and Grand Ole Opry host John Conlee said to fellow Kentucky native Sturgill Simpson after Simpson performed Saturday night at the Opry in Nashville.

Simpson, a native of Breathitt County who graduated high school in central Kentucky, will be in Whitesburg later this week to perform the style of country music many fans of the genre term as “pure” — similar to that performed by past greats such as Waylon Jennings, Merle Haggard and George Jones.

Simpson, who will appear at Summit City Friday night, is tour- ing behind his new and highly acclaimed album “High Top Mountain,” which is named in honor of a cemetery where many of his family members are buried near Jackson.

Among the album’s highlights is the song “Some Days.” One of two songs Simpson performed at the Grand Ole Opry (he made his debut there in August) the song deals in part with what many longtime country music fans see wrong with modern country — too many middle-of-the-road rock musicians dressing up as country players and singers.

“I’m tired of you all playing dress-up and trying to sing them ole country songs,” Simpson sang to loud applause.

“The force is strong with Sturgill Simpson — the force of hard-core country music, a la Waylon Jennings and George Jones, that is,” said Roy Kasten, a programmer at KDHX radio in St. Louis.

“It’s easy to see why fans of traditional country music have latched onto High Top Mountain as fiercely as they have,” Matthew Everett wrote in the publication Knoxville Metro recently about the album “ High Top Mountain.” “Simpson’s voice bears an eerie resemblance to Waylon Jennings’s, and he sometimes uses phrasing identical to Hank Williams Jr. The disc features contributions from pianist Hargus ‘Pig’ Robbins, a Country Music Hall of Famer who’s recorded with George Jones, Conway Twitty, and Loretta Lynn.”

Admission to Friday’s show is $12.