Music standing the test of time 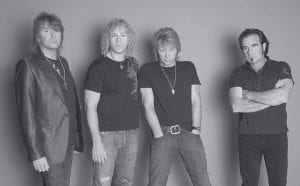 Much of the rock ‘n’ roll and pop canon is well established.

Buying the albums of ’60s and ’70s acts like the Beatles, the Beach Boys, Led Zeppelin, Jimi Hendrix and Bob Marley is akin to a rite of passage for any young music fan. These are the artists that baby boomers love to keep buying, and with whom seemingly every teenager at some point experiments. (Remember A.J. hearing Bob Dylan for the first time in the “Sopranos” finale?)

Now that the ’80s and ’90s are ancient history, what albums are people still buying from those decades? Do critical favorites like Radiohead and the Pixies grow more popular with time? Or do the Backstreet Boys and Madonna still rule the charts?

The short answer is that, above all, people are buying vintage Metallica, AC/DC, Bon Jovi, Guns ‘N Roses and, well, Trans-Siberian Orchestra.

AC/DC’s “Back in Black” (1980) last year sold 440,000 copies and has thus far sold 156,000 this year, according to the Nielsen SoundScan catalog charts, which measure how well physical albums older than two years old are selling. (All figures for this article were provided by Nielsen SoundScan.) 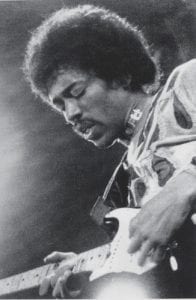 RIPE FOR DISCOVERY – Discovering music by legendary rock artists like Jimi Hendrix, photographed here at the Isle of Wight Festival in England in 1970, remains a rite of passage for young music fans today and keeps the late musician’s music selling well. (AP photo)

Those “Back in Black” numbers would make most contemporary CDs a success. Metallica’s self-titled 1991 album is altogether the second-biggest selling album of the Nielsen SoundScan era, which began in 1991. “Metallica” sold 275,000 copies last year.

Michael Jackson, of course, still has one of the most desirable back catalogs. His best- selling “Thriller” moves over 60,000 copies a year and his “Number Ones” collection yielded 162,000 sales last year.

Avid fans may be buying everything their favorite artist puts out, but there’s more than nostalgia fueling vintage sales.

“Young fans aren’t excluded from catalog sales – especially the ones who really get interested in music, there’s always that sense of discovery,” says Geoff Mayfield, the director of charts at Billboard Magazine.

The same trajectory has befallen past mega-hits like Ace of Base’s “The Sign,” Bobby Brown’s “Don’t Be Cruel” and the Spice Girl’s “Spice.” Though one of the best selling artists of all time, Mariah Carey’s selftitled debut sold a measly 5,000 copies last year. The Backstreet Boys’ “Millennium” managed only 9,000 sales.

“The only thing that kept coming to mind to me was that line in the Bruce Springsteen song: ‘Someday we’ll look back at this and it will all seem funny,”‘ recalls Rolling Stone senior editor David Fricke.

Now, some critical hits that were trounced on their initial release by the likes of ‘N Sync can claim a measure of commercial superiority. The Flaming Lips’ “Soft Bulletin,” often hailed as one of the best albums of the ’90s by critics, sold a solid 38,000 copies last year.

Current events can alter the charts. When Ray Charles died, his older albums spiked for months, says Mayfield. A new album from Alanis Morissette would surely increase sales of her 1995 disc “Jagged Little Pill,” one of the best selling albums of the past 20 years.

Likewise, recent reunions of the Police and Genesis can be expected to increase sales of their catalogs. The Police’s 1986 com- pilation “Every Breath You Take” has already doubled its already strong 2006 sales by selling 107,000 copies so far this year.

Still, many albums that are consistently revered on critic top-ten lists of the ’80s and ’90s have not sold much. Joy Division’s “Closer,” the Smiths’ “The Queen is Dead,” My Bloody Valentine’s “Loveless,” and REM’s “Murmur” all sold 12,000 copies or less last year.

Labels often reissue classic releases to capitalize on the devotion of die-hard fans and to attract a new audience. In the past few years, revered indie label Matador Records has released Pavement’s first three albums, including “Slanted and Enchanted,” a disc frequently ranked among the best in the ’90s.

“It’s almost like a new release for us,” says Matador founder Chris Lombardi. “We probably sold in a one-year period, pretty much what those records sold in their first year period when they were initially released.”

Though hip-hop continues to rule today’s charts, many of its most historic albums don’t enjoy the catalog sales that those from rock’s heyday do. Public Enemy’s “It Takes a Nation of Millions to Hold Us Back” sold 15,000 copies last year; Beastie Boys’ “Paul’s Boutique” sold 22,000; and Run DMC’s “Raising Hell” sold far less than both.

So far this year, catalog sales are down 11.7 percent, but that’s stronger than overall sales, which are down 14.7 percent, according to Billboard. It’s a major portion of the music business. This year’s total catalog sales of 95.6 million copies accounts for about 40 percent of all albums sold physically.

When people switched from cassette tapes to compact discs, catalog sales received a windfall as people re-bought their collections. The onset of digital downloading hasn’t had that affect because CDs can easily be downloaded to your iPod, but digital stores do have the advantage of unlimited (virtual) store space to sell older music.

The International Federation of the Phonographic Industry (IFPI) has pegged catalog downloads as 64 percent of all download sales in the U.S. (Apple declined to share its iTunes data on catalog sales.)

That still leaves illegal downloads unaccounted for, as well as a more important quantity: cultural impact. Though bands like Sonic Youth, the Ramones and Public Enemy may never sell as much as other acts, their influence remains immeasurable.

“Impact is not strictly about sales,” says Fricke. “Otherwise everyone would be running around forming bands that sound exactly like Poison.”