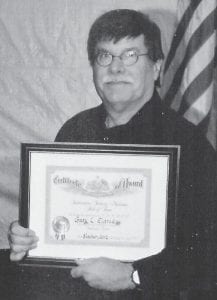 Gary L. Eldridge was born and raised in Dearborn County, Ind., graduating from Aurora High School. Growing up, he listened in the early mornings to WSM out of Nashville before getting on the bus and heard Lester and Earl on the Martha White Show. To him, it was just regular country music.

Gary Eldridge had four uncles, all brothers, all musically inclined, to thank for his life as a musician. When he was 14, he was given a used guitar by his Uncle Ed and he immediately began plucking out tunes on it, not yet knowing anything about “chords.” His Uncle Jack soon showed him what chords were.

In the summer of 1972, his Uncle Jerry gave him an old mandolin and Eldridge immediately began to try to learn to play this fascinating instrument. For Christmas 1972, his dad gave his mother a console stereo, and bought two albums of the Stanley Brothers. What Eldridge heard “clicked” — bluegrass music was as distinct from country music on the radio as he could imagine and it sung straight to his soul.

His Uncle Bob began taking him along on trips to see bluegrass shows. He saw Bill Monroe, he saw Ralph Stanley, and he saw a multitude of individuals who would become stars and heroes to him later: Ricky Skaggs, Keith Whitley, and later a teenaged fiddler from Chicago named Allison Kraus.

Eldridge started taking his guitar to school and playing along with other musicians there at lunchtime.

He attended Alice Lloyd College and became a part of a college bluegrass band that performed all over central and eastern Kentucky. While at Berea College later, he was a co-winner of the Red Foley Award along with Red Foley’s granddaughter Kelli Cummins for his work on the campus music scene both playing music and as an MC for shows at the college for such groups as J.D. Crowe and The Osborne Brothers.

Also while attending college, he became part of a bluegrass band with future stars Lennie Centers, Barry Crabtree and Chris Miller. He also became part of the Wilderness Road Jamboree in London, whose leader, Dr. Campbell Mercer, is now head of the Bill Monroe Homeplace in Rosine.

After college and moving back to Indiana, Eldridge continued playing and singing in the Greater Cincinnati area. First he played with Buckeye Ridge whose personnel included later IBMA award winners John Rossabach and Jon Weissberger. In 1996, he was introduced to the guys who call themselves Rural Route 2 and has been playing with them ever since as mandolin player, lead and tenor singer.