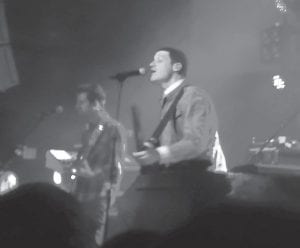 The New Orleans band MuteMath brought a large light show with them for their show at The Orange Peel in Asheville.

When the lights at The Orange Peel Social Aid and Pleasure Club in Asheville, N.C., finally dimmed for a concert by the New Orleans alternative rock band Mute- Math, audience members peered toward the stage. After several seconds of anticipation and nothing happening, the crowd soon started to murmur with curiosity when all of a sudden rows of lights came from the venue’s exit. The perplexed audience quickly realized it was the band parading through the crowd and onto the stage as if they were grand marshals on the biggest float at Mardi Gras.

With instruments in hand (even the drummer was carrying drums through the tightly packed crowd), the band eventually made it past the surprised audience and onto the stage to begin an incredible two-hour set that included every song from its latest album Odd Soul.

MuteMath’s procession of sound paraded through Asheville a decade after the band got its start in a family garage in New Orleans — its members influenced by a wide spectrum of artists ranging from The Police to Bjork as well as groups from New Orleans.

The group was in Asheville for a Sunday night show (March 11) while touring in support of Odd Soul. Opening the show was Canon Blue, an electronic folk and soul band from Nashville, Tenn., whose performance was extremely impressive.

MuteMath’s 26-song set featured members playing several electronic instruments such as the keytar and AxeSynth along with traditional instruments including a piano, organ, guitars and drums. As Mute- Math was playing, it was clear to see how much the band’s members truly get into their music. This was most apparent when drummer Darren King had to place Duct Tape around his headphones and across his forehead to keeping them from falling during his persistent head banging.

After an hour and a half of hearing a band play, many crowds grow bored, but MuteMath kept fans on their toes. They did this by performing an acoustic set, a drum solo on a platform that stood in the middle of the crowd, and constantly going back and forth from crowd to stage while treating the audience as equals. A large air mattress was also tossed at the crowd with glowing lights wrapped around it to resemble a parade float.

Soon after the air mattress was thrown, lead singer Meany fallowed suit and landing on the mattress to create one of the most unique crowd surfs of all time. The band did all this while performing the hits including “Blood Pressure,” “Allies,” “Walking Paranoia,” and “Control.”

The band never seemed to grow tired before eventually leaving the stage for only a short time before returning for an encore of their Grammy-nominated song “Typical.” Paired with blasts from confetti cannons, it was a memorable finale to the night’s processions that could even rival Mardi Gras.