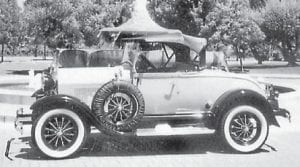 Pictured is Everett Vanover’s 1929 Model-A Ford Shay rumble seat roadster. The car is parked in the square in Napa, Calif., after a classic car show where it won first place.

During the early ‘80s a couple of men in Florida got permission from Ford to build the Model-A body with 1980 Mustang running gear.

The car had an automatic transmission on the floor, power steering, power brakes, sealed beam lights, back- up lights, bucket seats, Model-A horn, AM/ FM radio, tape player, wire wheels with wide, whitewall tires, spares on both fenders and a trunk on the back behind the rumble seat.

At one of my trips to a classic car show at Napa, Calif., I saw my first Model- A Shay. It had just won first place as the ‘best-looking’ car at the show.

I fell in love with the car and knew I had to have it. The owner was an older gentleman who did not drive anymore. His daughter drove him to the car show.

He wanted to sell the car, and wanted a lot of money for it.

He let me take the car for a test drive. I had it up to 70 miles per hour on the freeway, and I knew that car was meant for me.

I added it to my other two classic cars, my ’56 Chevy two-door and my ’55 Olds two-door hardtop, both in mint condition.

But I’ve had more fun driving my ’29 Model-A Shay than any car I’ve ever owned. I can drive through the main gate at Travis Air Force Base and the guards give me a salute.

People tell me that it’s the best-looking car they’ve ever seen.