My 37th year of senior softball 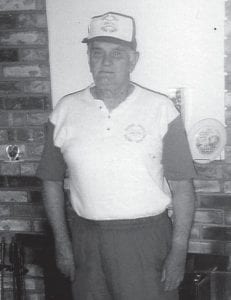 SOFTBALL PLAYER — Everett Vanover recently resumed playing on the over-80 team of the Senior Softball Club.

A couple of weeks ago I went in for my flu shot. After I received my shot and was talking to my nurse, I told her to say hi to her grandpa for me.

I’ve known her forever, and with tears in her eyes she said that her grandpa had died the week before and was buried in the Veterans Cemetery where my wife is buried.

Her Grandpa Joe was in the military with me. He played on my team when we were younger and helped me start the Senior Softball Club in Fairfield, Calif., 37 years ago.

He played third base for me on the over-50, -60, -70, and the over-80 teams. We drove together on our traveling team. Joe was an outstanding player.

Thinking about Joe and the months away from the game, I knew I had to go back to my team. Joe was one of my over-80 team members who called me many times, asking me to come back.

After I returned to my team I found it was not that easy to show up and start playing again at my age. In my early years I was a good pitcher and could hit the ball as far as any of the players. I started with passing the ball around, then did some running in the outfield and hitting the ball.

We played a game with the over-50 team. My first pitch at about 10 miles an hour was hit back toward my head at what seemed like over 100 miles an hour.

I knew I was in big trouble .

The next morning, getting out of bed made my whole body hurt. I had always been in pretty good shape so this was something new to me.

But I’m going to hang in there and give it my best shot.