My adventure to the bluegrass festival 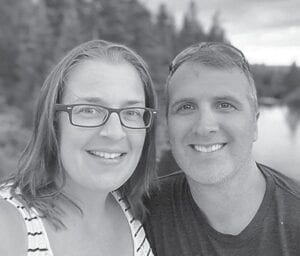 Jeff and Brooke Ison Ruskaup are pictured vacationing in Maine. They live in New York. She is the daughter of Michael Ison of Kingscreek, Roxana area.

Hello again everyone! It is hard to believe that August is here already.

Next month will officially start the beginning of fall, and it won’t be long until Christmas decorations will be everywhere, as Thanksgiving is always forgotten about.

Hallmark Channel as been a lifesaver for me, or should I say my sanity, as there have been Christmas movies during the month of July. Actually there’s a Christmas movie each week on Friday nights.

When I ventured back to the mountains of eastern Kentucky that I still call home, I had such peace of mind without television, computer and lots of times not much cell phone service. I enjoyed not knowing what was going on in the world, and since June I haven’t watched very much news.

When I do catch a little on the radio when I am in my car, it seems that I haven’t missed too much. I think I will have my granddaughter Jodi Gray Davidson make me a shirt with the words White Lives Matter, or All Lives Matter.

Friday afternoon Shawn Stamper shared a post on the computer that Sunrise Ridge was performing at the 7 Mile Bluegrass Festival on Saturday. 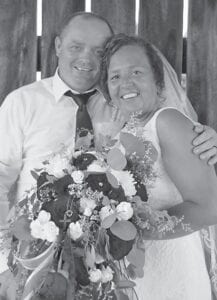 Congratulations to Shawn and Flo Stamper on their recent marriage. Shawn Stamper is in Sunrise Ridge Bluegrass Band.

Rain had been predicted several days in the Ohio Valley area. Saturday morning when I awoke I wasn’t feeling very well as my stomach decided to act up, plus the prediction of rain, so I made the decision to just stay home.

As I sat in my porch swing enjoying the birds, a ritual I try to do before I start my day, I really couldn’t decide if I wanted to take a chance to drive that far, and then I reminded myself that I have driven four and half hours to go to Campbell’s Branch and Carcassonne Community centers.

It was 8 a.m. and the trip is almost two hours to the festival. Well once again my feet and heart took over my brain. I was dressed, grabbed peanut butter and crackers in case sugar dropped, and a couple of bottles of water and tea. I knew I had half tank of gas, so I decided to stop to fill up since this trip was a little over hundred miles. 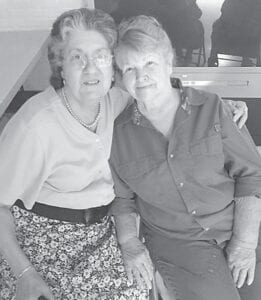 Southern Ohio correspondent Rose Ballard says, “Linda Hall and I were at Hemphill Community Center several years ago. Linda wanted Willard Hall to take a picture of us and the strobe lights made us look like we had purple hair. I will always treasure our friendship. Linda passed away a couple of months ago.

My son Keith Ballard was in the garage so as I passed I asked Keith if he had $20 so I wouldn’t have to stop by the bank as I didn’t have but a few dollars in my purse. Keith insisted I take $40 just in case.

Finally I sat out on the adventure to the festival. I was familiar with the route until I made a mistake and took the Greenfield exit. That in itself was a nightmare, as I asked for direction to Lyndon Road from three people who didn’t know.

Please, whatever you do if you ever need direction do not ask a foreign person, as they don’t know anything. Save yourself the aggravation. Lots of times they can’t speak enough English to understand you.

The fourth person I asked told me the general direction, except there were no signs for the bluegrass festival. I finally flagged a car down, and after he looked at my directions he asked me to follow him and he took me to the place that I had passed. The sign was under a mailbox.

The most important thing was that I made it in time to enjoy Sunrise Ridge with Shawn, Whitney, Natalie and Jack. Sunrise Ridge performed two times, and they did an exceptional, awesome show. I hope they will be booked back again next year.

I may sound biased, but Sunrise Ridge was the best band on the schedule.

7 Mile Bluegrass Festival is held an unusual place, as campers surround the stage at a short distance. If Sunrise Ridge is booked next year, God willing I will be there again.

After I arrived at the festival I didn’t know where to park, so I asked someone if there was someplace I could park close, as I had difficulty walking on uneven ground. All of a sudden two guys appeared, one offering to carry my chair and to assist me if I needed help, and another said he would park my car in the handicap parking area, then bring my keys. When I ready to leave they said to find someone with a yellow t-shirt on and they would bring my car to me.

I have gone to lots of festivals in the past 20 years, but I really don’t think I have had such consideration, and been treated any better than at this festival.

When I finally got settled at the festival I decided to take the $40 out of my pocket and put in my purse, and much to my surprise, I had no money. It bothered me thinking I was careless enough to lose $40, but there nothing I could do about it. Thank goodness I had a few dollars in case I wanted something to drink besides my tea and water.

When I arrived home, after I parked the car, I always look where I am stepping in the yard as I am afraid of falling, and to my surprise as I looked down, there was a folded, wet, $20 bill laying, about a foot away. There was the other $20 bill also. There had been a bad storm while I was gone, so it is a wonder the money hadn’t blown away.

As I was traveling on the way home, a severe storm hit with rain so hard the windshield wipers couldn’t handle it, then dense fog. You could barely see the flashing lights in front of you. Several cars pulled to the side of the road, including me. You bet I was glad to be home.

Congratulations to Shawn Stamper and Flo Combs Stamper on their recent wedding. Flo said she wanted to invite me, except she didn’t know how I would feel about coming during this coronavirus pandemic. I replied that I would have been there. I love Shawn and Flo and the Sunrise Ridge group like they are family.

How is everyone surviving the coronavirus as it is flaring up again? Our local school system hasn’t decided what to do yet, as to do online schooling or go back part time.

My daughter Angie Wiederhold found an apartment at Indian Foot Prints in Harrison. Angie had paid $300, plus $70 for applications fees. Angie wasn’t allowed to see the apartment before moving in as the woman showed her another apartment by virtual viewing. Angie insisted on seeing the apartment since she was supposed to move in Aug. 1.

The apartment wasn’t anything like she had been shown. The hallway was dirty, the refrigerator and the stove were junk, the ceiling fan didn’t work, the microwave had to be replaced, and the medicine cabinet was so old that even the woman who showed her the apartment couldn’t open it. Angie said she would she would be ashamed to have her family or friends to come visit her.

Angie called the corporate office to report how she had been lied to and told of the condition of the apartment so they are refunding her $300, but the application fee is non-refundable. Now she has an appointment with another apartment.

All this started because the lowdown piece of crap person she has been renting from for 14 years, wouldn’t check the air conditioner for mold when it first started being in the 90s. It was 84 degrees in the living room of her apartment. I am so thankful to God that I own my house, and as long as I pay the taxes I don’t have to worry about having to move.

My sympathy goes to the family of Les and Pat Wagner, as Pat lost her sister Janet to that dreadful thing called cancer. Pat and Janet were really close. I feel like I have let Pat down along with a few other friends. When I have stomach issues it seems I neglect everyone and everything.

I usually don’t envy people of things, but I do envy the closeness that this family has.

The only regret that I have in this journey called life, is the lack of education. I am thankful God gave me common sense, which I have met several educated people that somehow don’t seem to have a lick of common sense. I’ve always joked and said what God left out in brains He made up in guts and determination.

I’ve been called a spitfire, yes I am and proud of it.

Johnny and Ann Calihan are trying to behave themselves as they aren’t going out very much except to church and an occasional visit to their daughter Sue and Tom Wagner’s beautiful home.

Bertha Turner, of Linefork, is in need of your prayers. Keep her daughter Glenda in your prayers also, as Glenda’s daughter is in a lot of pain. Glenda lives in Alabama and it is difficult trying to travel back and forth.

Hello to Buddy and Bernice Grubb, and I hope you are doing alright.

Mike and Marcia Caudill, there’s not a day goes by that I don’t think of the Carcassonne Square Dance, even though I am not able to dance. I miss seeing you and everyone.

In a way, I will be glad to see 2020 come to an end, but I really doubt this coronavirus will disappear. Well it might when the election is over.

I am sure as quick as I send this writing in, I will think of something I wanted to say.