My athletic career later in life 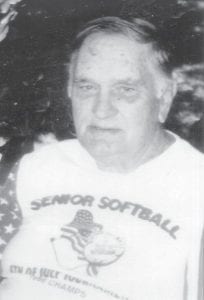 My military bowling and softball teams were the base champs many years during the ‘50s and ‘60s at Travis Air Force Base, Calif.

Another bowling team I was on in Fairfield was sponsored by a pizza place. We won trophies for them in the more than 10 years we bowled for them. We came in second place in the State Bowling Championship in Sacramento, Calif.

The only sport I had time for during wartime in Germany was our bowling team. We were the base champs the three years I was assigned there.

There were no sports at the Pentagon, and that’s one of the reasons I retired.

After I retired from the military after 27 years, and came back to my old job in California, I was on the bowling and softball teams in Napa, Calif. I also joined an older men’s team that played one night a week against younger men in Fairfield.

We kicked their butts.

When I became 50 years old, I helped put together a senior team as their manager. We played three nights a week. One of those nights we traveled and played all over northern California. (We had some day games on weekends.)

Every town should have a senor softball team for us old folks.

I was the horseshoepitching champ for three years at Travis Air Force Base in California.