My baby brother was a paratrooper 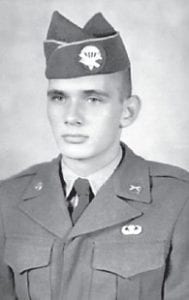 In June 1950, war broke out in Korea. I was the NCOIC of the base printing department at Lackland Fields, San Antonio, Tex., and was picked to open the print shop at one of the three new training command bases to train men and women for this new war.

I was sent to Sampson Air Base, in Geneva, N.Y., and was one of the first men to report to Sampson a week before Christmas, Dec. 1950, a month after my 21st birthday.

We had 37 enlisted men that arrived that first week from five training command bases from all of the United States.

My first printing job was to run orders that promoted all the men to their next rank. I received staff sergeant stripes and was told because I was the only printer, that I was “key personnel” and would be the only staff sergeant assigned to base quarters when my family arrived in a week from Jenkins.

While on leave in the summer of 1951 in Jenkins, my baby brother, Roger, then 14 years old, talked my parents into letting him return to Sampson during his school break. He spent the summer of ’51 and ’52 with my family.

He loved the military and the job I had at Sampson.

At 16 years old, he joined the 82nd Airborne as a paratrooper, and after his basic training was sent to South Korea in the last 18 months of the war, where he saw lots of action.

My brother Dickie was a cook for the Air Force, and was also in Korea at that time. My half-brother, Erman Short, was a military policeman, and was also there.

I spent my four years of the Korean War at Sampson Air Base, N.Y.

My three brothers and I served our country for over 75 years, total. I’m the only brother left of these military men.

Roger was a very handsome man, and the girls were crazy about him.