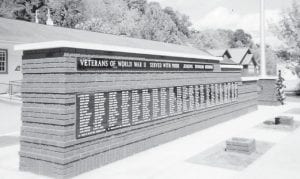 I left Jenkins as a young teenager on a troop train on my way to Sheppard Field, Texas. It was my first time away from home. What an experience that was. I felt like I was in another world.

When I finished my 12 weeks of basic training in the Army Air Corps, I was told I was an ideal candidate for radio operator school at Scott Field, Ill. I would learn Morse Code and be assigned to a B-17 bomber.

Word got around that some students went nuts, and others were having nightmares from all the Morse Code being crammed into their bran. It scared us new guys. I never saw any of this in my classmates.

I saw many aircraft taking off and landing at both Sheppard and Scott Fields, even had my picture taken standing next to them, but now I was about to fly in one. This old Kentucky boy was very nervous.

The last two weeks my class was put on a plane. When we were in the air we talked in code to other aircraft, and our base. Some of it was fun; we sent some weird messages to each other.

Then, the war was over and the military found out it did not need the thousands of radio operators being trained. Most of the bomb- ers were parked along the runways all over the world.

I had been in the service for one year, and was given the choice of being retrained or being assigned to the Reserves at Godman Field, Ky. I chose the Reserves. I was so happy to get back to Letcher County.

When I could not find work in Jenkins except the coal mines, I reenlisted in the 9th Air Force at Langley Field, Va., and was assigned as crew chief in the Air Sea Rescue Service, flying L-4 Aircraft with my enlisted pilot for the next 18 months.

I then asked for on-thejob training in the printing career field, the best move I ever made.

I was an Air Force printer for the next 24 years.