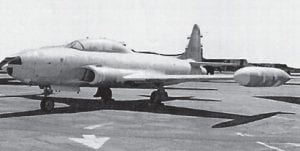 The T-33 trainer “T-Bird” came from the F-80 fighter, which bore the name “Shooting Star”. By adding three feet to the fuselage, the world’s first jet was born. The cockpit grew to two places and the six machine guns came out.

The two-seat jet was designed for training pilots already qualified to fly propeller driven aircraft. The T-33 made its first flight in 1948, and production continued until 1959. Their speed was 455 miles per hour.

In the mid ‘50s, I had emergency orders to go to my home in Jenkins. My commander found out I had to get home in a short time. He was slated to fly cross country in the next couple of days for a meeting at the Pentagon. He moved his take-off time up for me, took a T-33 aircraft so I could fly with him, changed his flying route, and flew me to Wright Patterson Field, Ohio. I hitched a ride to Jenkins.

In three days, I hitched a ride back to Wright Patterson Field and he was there waiting for me to fly us back to our home base.

My commander and I were together many years, both overseas and stateside.