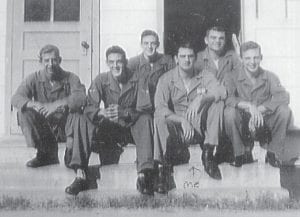 Everett Vanover (third from right) is pictured with some of his printers taking a break at Lackland Field, Texas, is 1948. Vanover was 19 years old and had four years of service in the military.

In 1948 I was assigned to the printing department at Lackland Field, Tex., for onjob training. The supervisor was a non-printer.

I wanted to learn to use all the equipment in the shop. All the printers want to do their time, get out of the military, go home and find a civilian job where they could make lots of money that they were not making in the military. They had no time to train me.

I took the equipment manuals to my barracks at night and read them many times until I knew all about each piece of equipment.

I had more time in grade and service than the other printers, and our boss put me in charge of them. I never fit in with some of these me. I knew then that I would never treat my workers the way they treated me.

In my 27-year career I guided decades of men and women, groomed them into NCOs and mentored them in their military careers. I got to know their families and helped them any way I could. They became a part of my life.

It’s easy to treat them like family, because they were. These printers knew all my family.

In 1968, when I was assigned my last three-year tour in Europe, eight of my 20-some stateside printers volunteered for Europe to work for their old boss again.

After 55 years, many of these people are still in touch with me.