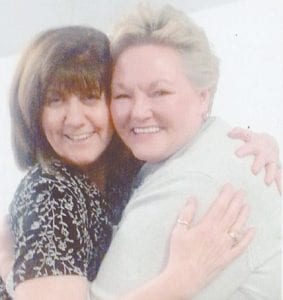 Vickie Hatton Underwood and JoAnn Howard Brown hugged as they saw each other for the first time in 48 years.

Hello everyone, how are you all doing?

I haven’t seen many people and don’t know what they are doing and where they are going. Interested people would like to know. I hope all of you are doing well.

I went to the funeral of Danola Adkins Andrew and I sure was pleased to see some people I hadn’t seen in a while, especially Judy Hill, my cousin. She is the daughter of Carminella “Tommie” Palumbo Adkins, who lived in Whitesburg until she married. Her husband was in the service and she moved away with him. I sure was pleased to see Judy. It had been so long I didn’t know her, but I asked and we had a lot to talk about.

Did I say she was very pretty? She sure was.

I got to see my cousin Bro. Cecil Howard and his family and also Ann Hall, who lives up the road from me. She is still so pretty!

I’m glad that people don’t forget about friends when they move away.

It’s always good to see Imogene Adkins and her sons and their wives and family. They were all at our Howard reunion. We see Jim and his wife from time to time, but Bill and his family live near Georgetown and we don’t get to see him much. 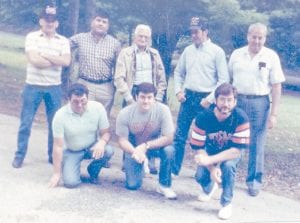 I enjoyed my sister Betty Tyree coming to visit me, especially since she brought me some pawpaws. I love them!

I just heard Nova Poloskey had died. I think she had a flower shop; I’m not sure. But I knew her and always liked her. Our sympathy goes out to her daughter Barbara. I don’t know if she had more children.

My brother Hubert Howard and his grandson Christian came out to visit me and I sure enjoyed it. I enjoy visiting him and his wife Joyce and anyone else there. I love being around people.

We had a wedding in our family, Miranda Tyree, daughter of Randy and Missy Tyree, and Tony Stewart. The wedding was at Millstone Church. Our best wishes go out to them. I heard the wedding was beautiful with a large crowd and lots of good food.

I just got word that a cousin of mine, Arlie Howard, son of the late Ellis and Sylvester “Vess” Howard, died. I don’t know where he lived or any of the arrangements. I’ll find out.

I still haven’t had a chance to go to Senior Citizens, but I’m still trying.

I know all of you are enjoying this pretty weather we are having, but winter will be upon us before we know it. If I don’t have to go out, I really like to watch it snow. I’m not in a hurry, but I try to get ready for it.

I haven’t heard from anyone much. I want to say hello to all my friends and I love hearing from all of you.

May God bless all of you and your family and try to be in church somewhere if you are able.