My three days of R and R 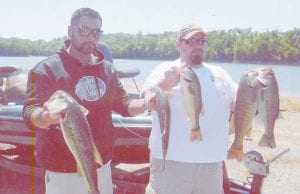 Members of the team winning first place in the third annual Good Old Boys Fishing Tournament were Travis Cornett (left) and Dustin “Hammer” Adams, both of Letcher County. The tournament was held in May at Cherokee Lake. The largest fish caught was a 17-pound, 13- ounce bass.

I was extremely lucky the 27 years I served my country. I had to keep my bags packed at all times so I was ready to fly anywhere I was needed.

He told me to take a few days off from all the hard work I was doing. I’m sure he was rewarding me for being his anchorman on his bowling team where we won the championship the three years I was in Germany. I think he liked me.

Of all the places I’ve been, my favorite had to be my three days in French Morocco at Ben Guerir Air Base. I went to Marrakech, where I saw sights ranging from snake charmers to an impressive European section of the town.

Marrakech is a fascinating and mysterious place.

At my age, as I look back on what I did, the places I’ve been, and the people I’ve met, I had a pretty good life for a kid born in the mountains of eastern Kentucky.