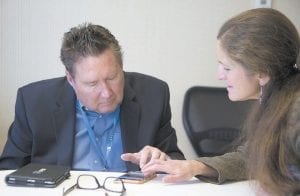 Dr. Argye Elizabeth Hillis of John Hopkins Hospital, talked with her patient Robert Voogt, left, as she spoke to The Associated Press during an interview in Washington earlier this week. Voogt suffers from primary progressive aphasia, a brain disorder. Families may not even seek care because they assume a loved one’s increasingly garbled attempts to communicate are because of age-related dementia, said Hillis. (AP Photo)

A mysterious brain disorder can be confused with early Alzheimer’s disease although it isn’t robbing patients of their memories but of the words to talk about them.

It’s called primary progressive aphasia, and researchers said this week they are finding better ways to diagnose the little-known syndrome. That will help people whose thoughts are lucid but who are verbally locked in to get the right kind of care.

“I’m using a speech device to talk to you,” Robert Voogt of Virginia Beach, Virginia, said by playing a recording from a phone-sized assistive device at a meeting of the American Association for the Advancement of Science. “I have trouble speaking, but I can understand you.”

Even many doctors know little about this rare kind of aphasia, abbreviated PPA, but raising awareness is key to improve care — and because a new study is underway to try to slow the disease by electrically stimulating the affected brain region.

PPA wasn’t identified as a separate disorder until the 1980s, and while specialists estimate thousands of Americans may have it, there’s no good count. Families may not even seek care because they assume a loved one’s increasingly garbled attempts to communicate are because of age-related dementia, said Dr. Argye Elizabeth Hillis of Johns Hopkins University. Often, it’s when those people reach neurologists who realize they aren’t repeating questions or forgetting instructions that the diagnosis emerges.

“Nobody’s talking to them, nobody’s involving them. It’s very sad,” said Dr. Margaret Rogers of the American Speech- Language Hearing Association. Yet for many, “they can handle their own finances, they can drive, they can appreciate music. There’s a lot that still works for them.”

Speech and language are hugely complex. Just to speak requires activating 100 muscles between the lungs and lips to produce at least 14 distinct sounds per second, said Dr. Joseph Duffy of the Mayo Clinic.

Stroke or brain injury patients often have trouble making sounds or retrieving words. PPA occurs for a different reason, because the brain regions that control language become diseased and degenerate, resulting in communication difficulties that may mimic broader dementia.

Special MRI scans can tell the difference, Hillis said. They also can help identify whose aphasia will worsen faster, and who has a subtype that can morph to become Alzheimer’s-like, where they eventually do lose memory and the ability to understand language.

Standard language therapy has patients match pictures to the correct word, to keep the wiring involved as active as possible. Now, Hillis’ team is testing if a kind of brain stimulation that sends electrical signals through the skull can rev up the effects of that treatment.

In the first 19 patients tested, people did better retrieving the right words for about two months after receiving the electrical stimulation than when they received sham zaps with their regular therapy, Hillis reported Sunday. They were more able to name objects they hadn’t practiced, and brain scans showed better connectivity in the affected region. But it will take far more study to prove if the treatment produces lasting effects, she cautioned.

Now 66, Voogt was diagnosed 10 years ago, with a form of PPA that makes him unable to say words even though he can understand and type them via email, text or his assistive device. He owns a brain-injury rehabilitation center, and knew how to track down a specialist for diagnosis when he first had trouble retrieving words.

Earlier this week, Voogt patiently answered Hillis’ questions by typing into a device called the MiniTalk, or calling up verbal phrases he’d pre-programmed into it. Asked to say “dog,” Voogt forced out only a garble. But asked what cowboys ride, he typed horses and the device “said” the word.

His form of PPA also impacts grammar so that he has difficulty forming full sentences, Hillis said. Asked to write that’s “it’s a cold day in Washington,” Voogt typed a minute or two and the device’s recorder emitted “cold Washington D.C.”

Voogt typed that he started relying on the device in 2012, but lives independently and travels internationally. But asked how difficult the loss of language is to live with, he typed out a pretty bad rating — 70 percent.