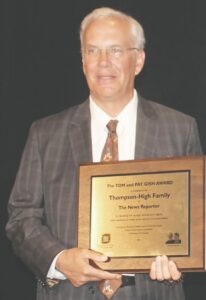 Les High with the Tom & Pat Gish Award presented to him and other members of his family in Lexington last week.

Some of the nation’s best rural journalists received awards last week as Chuck Todd of NBC News told them that their work “has never been more important.”

The University of Kentucky’s Institute for Rural Journalism and Community Issues presented the Tom and Pat Gish Award to the late Tim Crews, editor-publisher of the twice-weekly Sacramento Valley Mirror in Willows, Calif.; and to the Thompson-High family, who owned and operated for three generations The News Reporter in Whiteville, N.C.

The Gish Award is named for the late publishers of The Mountain Eagle in Whitesburg, who exemplified the values of courage, tenacity, and integrity in rural journalism for more than 50 years. Their son Ben Gish, who edits the Eagle today, helped choose the winners and present the awards October 28 at the Al Smith Awards Dinner at the Griffin Gate Marriott Resort in Lexington. It was the first held without Smith, co-founder of the institute, who died in March. 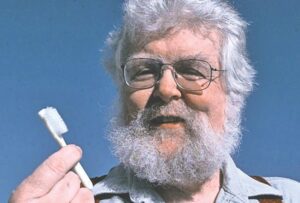 Tim Crews held up a toothbrush outside a jail after serving five days in 2000 for refusing to give up an anonymous source. Crews died before he could recieve the 2020 Tom and Pat Gish Award, which was presented to his widow, Donna Settle, last week. (AP Photo)

Crews was “one of the greatest fighters for open government at the local level in this country,” Institute Director Al Cross told the crowd. Crews died in November 2020, but his widow Donna Settle, who still publishes the Mirror, accepted the award on his behalf in a video. She said Crews started standing up to bullies in kindergarten, first with an older boy who tried to steal his milk.

Reporting in Fort Morgan, Colo., Crews “changed the town forever,” said Settle. He ended a sheriff’s career by discovering he was illegally giving gun permits to family and friends. In Glenn County, California, Crews “had the attention of the county government and the city government and school district, knowing that when he asked for something, he would fight to get it.” And when a judge threw him in jail for refusing to reveal his sources, he wrote about it “from jail on little pieces of paper and pencils provided by fellow inmates who admired what he was doing.” 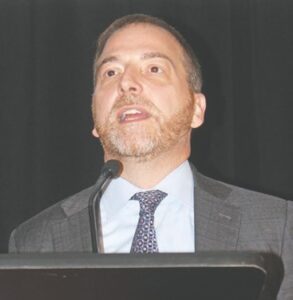 Rural journalism was the love of Crews’s life, Settle said, because it offered many challenges and allowed journalists to deeply engage with their communities. But, when they became a couple, Settle discovered the bravery required of a reporter when she had to get used to seeing local officials in public after Crews wrote critical stories about them. “That was a challenge that I hadn’t realized before, and I’m sure practically all good rural, small-town reporters go through the same thing,” she said. “You have to stand up to them. Tim never backed down … on getting the public the open records they were entitled to.”

The 2021 Gish Award winners, the Thompson-High family, were no strangers to speaking truth to power. Under publisher Leslie Thompson, The News Reporter and the nearby Tabor City Tribune became in 1952 the first weeklies to win the Pulitzer Prize for public service, for reporting and commentary that quashed the Ku Klux Klan in Columbus County, where the group had become entwined with law enforcement. Thompson “was a principled man who never wavered from his core beliefs,” said grandson and longtime publisher Les High, who accepted the award on the family’s behalf.

“Since then, The News Reporter has continued to show courage, integrity, and tenacity by holding accountable local public officials — especially those in the criminal-justice system,” said Cross. “ The paper has done this despite significant financial adversity, reader and advertiser boycotts, personal attacks and threats against family members; and taking smaller profits to better serve its readers, while always looking ahead.”

When Leslie Thompson died suddenly in 1959, son-in-law Jim High took over, husbanding the paper’s shaky finances into a healthier state and continuing its tradition. “He did not shy away from a good fight either,” Les High said.

High said he loves the line from the Apple TV series “Ted Lasso” in which Ted is told: “The truth will set you free, but first, it will really piss you off.” He concluded:

“ The truth, however, is hard to come by today. When you hear the stories about Tom and Pat Gish or Tim Crews, we wonder if journalists today are made of the same stuff. The answer is a resounding, ‘ Yes!’ Increasingly diverse media outlets are still producing remarkable stories with smaller staffs and fewer resources while operating under a difficult business model. Reporters do this for little pay, work long hours and endure personal attacks where they are cast by would-be autocrats as the enemy of the people.

“But that doesn’t change the mission. Our fragile democracy is under attack — and as we have seen — truth is the first casualty. Many of us tonight, myself included, stand on the shoulders of giants who risked their lives and livelihoods to tell truth to power. We owe it to them, our communities, and this nation to persevere with courage and tenacity despite the daunting headwinds that lie ahead.”

Chuck Todd agreed. In his keynote speech, NBC’s “Meet the Press” host said the nation is at war over basic facts. But, though their work has never been more important, “Our work’s never been more second-guessed or worse, misconstrued and even attacked.”

“Rural journalism is truly a community service,” Todd added. “It’s incumbent upon all of us to be ambassadors for this work.”

Speaking after presentation of the awards, Todd said, “I have to tell you, this has been a great tonic tonight. …I wish a lot more of my colleagues in D.C. and New York would hear some of these stories. I know we need to do a better job of covering America. …There’s a lot more to learn, sometimes, in rural American than there is in urban America.”

The dinner, which was not held in 2020, also saw presentation by the Institute and the Society of Professional Journalists Bluegrass Chapter of the Al Smith Awards for public service through community journalism by Kentuckians, to Becky Barnes of the Cynthiana Democrat for 2020, and to WKMS, the radio station at Murray State University in the far western end of the state, for 2021.

Source: The University of Kentucky’s Institute for Rural Journalism and Community Issues.