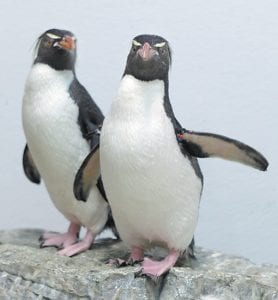 The Newport Aquarium’s two new male penguins are shown. When the Aquarium’s renovated penguin exhibit reopens in March, it will be a playground for both people and penguins. The birds will get a new home with a rocky wall, a waterfall and an expanded ceiling while visitors will get an improved seating area, a live show and a play area. (AP Photo/The Cincinnati Enquirer, Patrick Reddy)

When the Newport Aquarium’s renovated penguin exhibit reopens next month, it will be a playground for both people and penguins.

The birds will get a new home with a rocky wall, a waterfall and an expanded ceiling while visitors will get an improved seating area, a live show and a play area.

“I think this new exhibit that we have is going to really be exciting for all of our guests,” said Ric Urban, the aquarium’s curator of birds and mammals, “because it’s a new and exciting exhibit both on the guest side and on the animal side.”

The newly dubbed Penguin Palooza will also include two new species, the rockhopper penguin and the Inca tern. With the addition of the rockhopper, the aquarium will become one of the few attractions in the country with four species of cold-climate penguins on display, Urban said.

The popular penguin exhibit closed Jan. 3 and the birds were moved to a warehouse facility about a mile from the aquarium. The new exhibit is scheduled to open March 26. 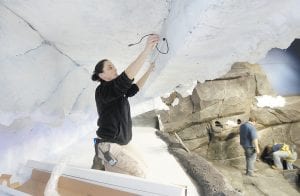 Emily Margolen, a life support engineer at the Newport Aquarium in Newport, Ky., checked the position of an LED fixture that will be installed in the penguin exhibit during its renovation. The Aquarium’s renovated penguin exhibit reopens in March. (AP Photo/The Cincinnati Enquirer, Patrick Reddy)

“You can stand out here on a Saturday afternoon and you can hear the guests go, ‘where are the penguins?’” Urban said. “ They miss them, but I think it will be well worth the wait.”

The penguin exhibit is the last visitors encounter before leaving the aquarium. The renovation is the most expensive upgrade since the facility opened in 1999, though officials declined to say how much it cost.

“It’s important for our guests to be happy but change is necessary,” he said. “This is one of our anchor exhibits, and one of our most popular exhibits.”

A new seating area will bring visitors closer to the birds and children will be able to stand against the glass of the 8,000-gallon saltwater pool. There will also be a live show, with a presenter telling the audience facts about the penguins while a large flat-screen TV features animated penguins.

The public space will also be expanded by 660 square feet to include more information about penguins and three life-size penguin sculptures where children can pose for photos.

Inside the 1,000-square-foot penguin habitat, six new rock hoppers will join the 28 other penguins including king, gentoo and chinstrap.

Rock hoppers are among the smallest penguins, with an average length of 20 inches and an average weight of about 6.5 pounds, aquarium officials said. The Cincinnati Zoo and the Louisville Zoo both have the rock hopper penguins. Only four other institutions in the county have chinstrap penguins.

The renovations added several outcroppings to the formerly flat rock wall, giving the penguins more places to perch. There’s also an artificial ice hole that the birds can swim through. Another artificial ice feature will trickle water down the side of a rock wall, providing another play area for the birds.

A dome ceiling in the exhibit was also removed, adding 16 feet of vertical space. That allowed the aquarium to add the Inca terns, birds usually found on the coasts of Peru and Chile.

“These guys are high energy,” Urban said. “They love to fly, they will fly down and take fish out of the water and make a lot of noise.”

Because the aquarium keeps the penguins and terns on their native southern hemisphere cycle, the lights in the exhibit go off about 4 p.m. in the summer. In the old exhibit, that left visitors unable to see the birds. In the new exhibit, a night-time lighting cycle based on the southern hemisphere’s version of northern lights will allow the birds to be seen at “night.”

Aquarium officials plan to allow the penguins to get acquainted to their new home for a while before opening the exhibit to the public.

The first residents will be two chicks and their parents, including the aquarium’s first chinstrap chick. Once they are acclimated, the other birds will follow.